A Web-browser is a computer program that accepts HTML (Hypertext markup Language) and displays it on the device, and may be on many different platforms: Windows, Apple, Unix, and Mobile devices. The most popular Browser has changed many times and depends on many factors including: Company policies (Microsoft bundling Internet Explorer with Windows), Devices being used (Mobile devices) and this is commonly referred to as the Browser Wars. For a quick introduction go to 20 things I learned about browsers & the web[1]

Browsers that you need to consider when developing Web Applications

Which one to use?

Browsers are continually evolving, however a basic rule of thumb is if you are using a web application from a particular company use their web browser for maximum functionality. For example, if you use Microsoft's Web-Outlook use IE, if you are using the Cloud based Google Documents use Chrome, and so on. 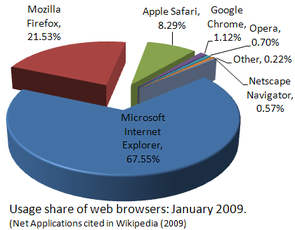 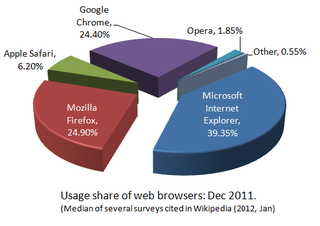 Activity: Go to http://en.wikipedia.org/wiki/Usage_share_of_web_browsers and see what Browsers a Developer needs to consider.

And concluded that IE9 64 bit was the slowest, while the rest showed no real speed advantage.

The ability of a Web Browsers to conform to current standards is based on Browser engines.

The first popular GUI browser was NCSA Mosaic, which was developed at the National Center for Supercomputing Architectures at the University of Illinois by Marc Andreessen, Eric Bina and a team of staff and students. When Mosaic was released onto the Internet in 1993 the WWW really took off since its friendly point and click interface was so easy to use. Mosaic gained 2 million users within a year.

Marc Andreessen left NCSA, and formed Mosaic Communications with Jim Clark of Silicon Graphics. They quickly renamed their company Netscape Communications. The first version of their browser, Netscape Navigator 1 was released in 1994, and was available free to private or educational users. Commercial users had to pay. Companies like IBM licensed it and distributed it under different names. The main advantage over Mosaic was multithreading, the facility to allow images to be transferred simultaneously. It also had the ability to display text and pictures before the complete document was transferred. This made it more useable on systems that have slow network connection to the Internet.

Netscape continued to release new versions of their Navigator browser, and each has been a huge success with millions of downloads. The majority of WWW users tended to switch over to the new version within months of it being released. However a significant minority of people tended to stick with whatever browser they first used and not update, so web pages must always be designed with users of older browsers in mind. For example these people may be less confident users who do not know how to download and install software, or they may have older computers which do not have enough memory to run the newer bigger software.

Microsoft Introduced Internet Explorer in 1995. Surveys indicated that by Jan 1996 IE held about 2% of the Browser market! By September 1998 usage of IE overtook Netscape Navigator.

Another popular web browser that has appeared is Opera. Its small size (initially it would fit on a floppy disk) meant it gained a dedicated following.

For a history and downloads check the opera web site.

As the WWW became popular designers began to complain about the inability of HTML to format and layout the information on a page. Consequently the browser manufacturers began to add new features to their products to improve the design of web pages. These features were browser-specific, meaning that the HTML tags could only be understood by one company’s browser. When Netscape was the only popular browser on the WWW this didn’t matter, but when Internet Explorer was launched with a different set of browser-specific tags, it became an issue.Around 1996 it was very common to see signs on websites reading "this site is best viewed with Netscape" or "this site requires Internet Explorer". Often website designers would create two versions of the same website! The features were also ahead of the HTML standards, meaning that the HTML tags were not part of the current protocol. The best of the new tags, for example tables or frames, both first introduced in Netscape 2, were eventually added to the HTML standards. For a while Netscape actually drove the standards along.

Firefox is a free, open-source web browser for Windows, Linux and Mac OS X and is based on the Mozilla codebase.

Mozilla is an open-source web browser and toolkit, designed for standards compliance, performance and portability. The Mozilla Foundation coordinates the development and testing of the Firefox browser by providing discussion forums, software engineering tools, releases and bug tracking

What’s the difference between Firefox and Mozilla?

Mozilla (Application Suite, also known as SeaMonkey) is a complete suite of web related applications, such as a browser, a mail/news client, a chat client and much more. Firefox is just a browser, which makes it a better choice if you already have a mail client for example. Also, since Firefox is smaller than the whole Mozilla suite, it’s faster and easier to use. 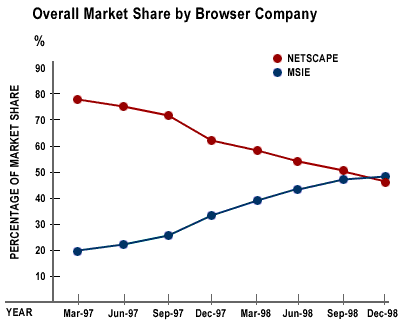 The battle between Netscape and Internet Explorer for the title of most popular browser was termed the web browser wars. For most of the early history of the WWW, Netscape was the most important browser. Around September 1998 Internet Explorer overtook Netscape as the most used browser. This was because millions of people were connecting to the Internet for the first time, and they had a free copy of Internet Explorer as part of their computer’s operating system, so why would they bother to download new software. However user studies show that older users of Netscape didn’t tend to change browser. Over time this has changed, with Internet Explorer holding the majority share of the browser usage.

The chart shows the rapid rise of IE.

Jul 2004 Internet Explorer's first-ever drop in browser market share. At the time, IE usage had dropped from 94.8 percent at the beginning of 2004 to 93.9 percent a few months later. As Firefox approached the big 1.0 milestone, its market share continued to soar, and it passed the 10 percent barrier in October 2005.

The following diagram shows the distribution of web browsers in 2007. Which ones have disappeared? Which are not there? 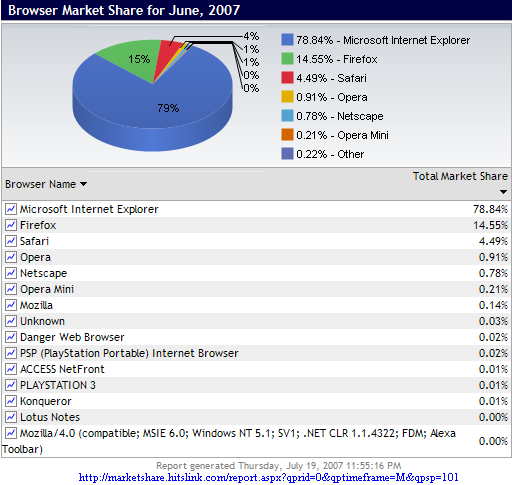 Based on the WebKit engine (same as Apple's Safari) Google chrome introduced its own web browser. Each Browser Tab was separated so if one tab "crashed" the others should remain unaffected.

As Browsers evolve features that assist accessibility are being developed.