Everything on the Internet is governed by a set of standard rules called protocols. Any computer network can communicate with any other as long as they abide by the standards. Even in ordinary life there are protocols. For example; Maori Protocol on a Marae, and formal meeting protocols where you speak through the chairperson, and minutes are taken, etc.

Example of a mail protocol

For example consider the Postal System. Once we have written a letter we need to have the recipient’s address. This is written on the envelope in a certain order: name, street, town and then the country last. We must then put the stamp with the required amount on it. We then take it to a receiving area (the post box) and put it in. The letter then travels to a central sorting area and is sorted. It is then dispatched to the destination country, then the destination city, and finally to the local Post Office. From there is goes to the individual Post Office person who will deliver it. If only one of these "protocols" is omitted, the letter may go missing or like email, be bounced back to the sender.

Compare that protocol with SMTP (Simple Mail Transfer Protocol) which is one of protocols that control the sending of Email on the Internet.

The email address must be written in a certain order: name, host, sub-domain, and domain. It is then send via various routers to the destination network, where a mail server delivers it into the individual person’s mailbox.

Some important Internet protocols are:

The communications protocol used to route packets of data across the Internet is actually composed of two parts.

The Internet is actually named after IP. TCP/IP enables computers using different operating systems to communicate with each other, such as DOS, Windows,Macintosh, and UNIX-based systems all use TCP/IP to communicate on the Internet. 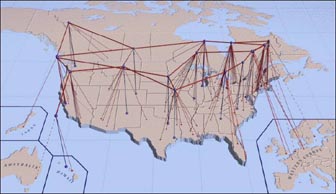 The Internet is composed of interconnected routers which forward packets of data to the next router. Each transmission is called a hop. Data needn’t take the shortest route to the destination.

It is possible to trace the route that the packets of data take as shown. The Figure shows a report screen from a package called VisualRoute, tracing the route from Fairfax (USA) to Wellington. Almost all data will pass through regional networks, national backbones and international gateways(Visual route, Mapping the Internet ,2000)[1].

The original IP address system used 32-bit addresses, represented by 4 numbers for example, 127.98.241.36. This allows a theoretical maximum of over 4 billion IP addresses (4,294,967,296) - in 2003 the earth’s population was just over 6 billion. In practice however because whole blocks of addresses are assigned at once, the Internet is ran out of addresses. So another inter-operable system was needed, and all the protocols for this have been worked out – it is called IPv6. It is a 128-bit system and uses 6 numbers, and IPv6 addresses are represented as eight groups of four hexadecimal digits separated by colons, for example 2001:0db8:85a3:0042:1000:8a2e:0370:7334, but methods of abbreviation of this full notation exist. There are thus 340 trillion, trillion, trillion possible addresses (340,282,366,920,938,463,374,607,431,768,211,456 !). Additionally, the current IP address system gives no information on location, either geographical location or network location. Because of this, Internet backbone routers have to maintain huge tables of where to send information for any given address. This slows the performance of the routers. In IPv6 however IP addresses will be given out in an elegant hierarchy, which will simplify routing. By 2014 around 4% of the Internet traffic was using IPv6.

Before the Internet was possible there had to be an agreement on a naming system. A system called IP addresses was decided upon. Addresses are numerical, for example 128.16.4.23. However you may never see a numerical IP address because the domain name system provides us with a more meaningful and easy to remember system. Domain names are converted to IP address numbers in the background.

Every country in the world has a top-level domain except the United States, because the Internet started there. Some examples of country domains are:

nz – New Zealand uk – United Kingdom au – Australia to – Tonga ca – Canada Country-level domain names are also called ISO domain names. On the 16th of January 2000, there were 3,216,807 of these domains registered in over 2000 countries. The countries with the most domain names registered is shown below. New Zealand is actually a very wired country for its size - it is 16th on the list.

In the US the top-level domains refer to the type of network connected to the Internet. The most important are: com – Commercial net - Network edu – Educational org – Organisation gov – Government mil – Military biz - Business (added 16 Nov 2000) info - Information(added 16 Nov 2000) pro - professional (added 16 Nov 2000) These top-level domains are also known as InterNIC domains after the organisation that oversees the domain name system. On the 16th January 2000, the total number of domains registered worldwide was 13,226,005. Of these 10,009,198 were top-level or InterNIC domain names. Anyone in the world can register a .com, .org or .net InterNIC domain name, but only the proper US authorities can register a .edu, .gov or .mil domain name. These domains used to be assigned only by Network Solutions, the company set up by InterNIC to provide domain names. However now there is competition and four other companies can assign InterNIC domains. Many businesses and organisations choose to register top-level domain names because it gives them an international appeal. For example groovyshirts.com is likely to get more orders from around the world than groovyshirts.co.nz, even though both may be hosted in New Zealand. An InterNIC domain name can have up to 26 characters (including the .com, .net or .org). Letters, numbers and dashes are all valid, but they cannot begin or end the name.

The New Zealand country domains, .nz are assigned by DomaiNZ ( http://www.domainz.net.nz ) , a company set up by the Internet Society of NZ to provide domain names. DomaiNZ charges $53.00 (+GST) a year to register a domain name plus a one-off $21 (+GST) set-up fee. The actual process of registering a domain name is carried out by an agent, typically a website designer or website hosting company. When registering either an InterNIC or an ISO domain name you must first check to see if that name is still available. This is done by querying a WWW database, and many websites that advertise domain name registration offer you this service. Try it out on a website of your name - check and see if it is already taken.

In recent years there have been a number of court cases, where companies have fought over who should own a particular domain name. Often small companies who registered domain names in the early years of the WWW, have been sued by large companies who have registered trademarks similar to the domain name. For example one famous early case was when US shoewear company Prince successfully sued a small UK business also called Prince who had registered the domain prince.com. In many cases the big company wins the case, but recently some small non-profit hobbyist website owners have fought back by encouraging online protests. A successful campaign forced Colgate-Palmolive to drop its case against the non-profit website ajax.com and Archie Comics recently dropped its case against veronica.org, a Web site set up by a Los Angeles man to celebrate the birth of his daughter Veronica in 1997.

Another common type of court case has been against the "cyber squatters" people who buy up popular brand names in order to withhold them from or sell them to the firms that own the brands. Unlike the disputes over trademarks, in all the cyber-squatter court cases the companies have won. In the most recent case, a Texas judge sided with Microsoft in its battle with two people who registered 11 domain names including "microsoftwindows.com" and "microsoftoffice.com." The amount of court disputes over domain names is increasing, but hopefully new rules being worked out by the organisations who control the Internet will make disputes over domain names less likely.

and the world’s longest domain name is 63 characters http://www.iamtheproudownerofthelongestlongestlongestdomainnameinthisworld.com

with Google Buying The Shortest Domain Name In Cyberspace – http://G.CN

Once you connect to the Internet, you interact with other computers using a client/server model. The resources of the Internet – information and services – are provided through host computers, known as servers. The server is the computer system that contains information such as electronic mail, database information, or text files. As a customer, or "client," you access those resources via client programs (applications) which use TCP/IP to request the information from the server. The server then transfers the information to your computer and the client program displays it on your screen

Instructions Being able to decipher URLs will make your time spent on-line much more productive. For example it will allow you to discard search engine results, or help identify the authority of the resource.

What do you think the URL of the homepage of each of these organisations might be?

Note: to prevent denial of service attacks many corporations will disable the ability to ping.

It should return the number of hops, the time for each hop, and the addresses of all the devices the message passes through to get to its destination.

You will probably find that some of the hops time out (or the host is shown as unknown).

(Note some of the IP addresses have been obscured with #)

ipconfig - Finds the IP address of the computer.