Note: As Flash (and Director) both use the term Movie to indicate an application I will use the term “Video” to represent a file such as a windows avi, wmv or QuickTime(mov).

Video was not part of Flash in its early days. Flash 4 allowed QuickTime Video to be imported, and was able to create a QuickTime mov file that could be viewed with the QuickTime 4 (or higher) player. Flash MX introduced an embedded video format.

Before you can use video in Flash it must be created. The better the original and edited video is the better your Flash video will be.

Probably the simplest way to create original video is by using a video capable Digital Camera or web cam, as the video is created in a digital format. The quality of these videos varies considerably. Downloading video from the Internet, or capturing video from TV/Video or DVD has extensive copyright problems, and does not follow the general rule often applied to text of 10% for fair use. It is safer to create your own video. Capturing video on a Video camera will give better results. From about 2005, video cameras that capture direct to Hard Disk or DVD have become popular.

Tape base video cameras are still being used extensively as their quality is probably still the best, but conversion to digital requires specialized hardware and software. Basically the video is played in the camera and streamed to a PC, the PC software then converts the analog video to digital. If your hardware cannot keep up (for example another program occurs while video is being captured – such as a virus scan - or the hard drive needs to find another sector) frames can be dropped.

Once the digital video is created it needs to be edited before inserting into Flash. Flash 8 does allow for some basic editing such as chopping off the start or end of the video, so any “in-video” editing needs to be done separately from Flash.

Flash 10 allows video to be imported or linked. You can link a QuickTime video if you have your publish settings to Flash 3,4 or 5. Use the online help for more information.

Just a few tips to improve your video.

When a video is embedded into a Flash Movie, it is saved in the library as an FLV (Flash video) file. So Flash needs to convert the video that you have captured into an flv format.

Compressing a video then decompressing for playback or editing is the job of a video codec (compressor-decompressor). Video formats such as Microsoft’s Audio Video Interleave (avi) or Apple’s QuickTime (mov) can use several different codecs. If the codec is not available on the computer the video it will not play!!. Compression can be temporal (interframe) or spatial (in-frame). Temporal, creates a keyframe then for successive frames stores the changes, whereas spatial means that a single frame is compressed by losing some information such as colours that are very similar.

Compressing video can take a significant amount of time, so a Video Encoder was available from Flash 8, and may be available in your system. This allows you to create a list of video files to compress and do them as a batch.

This videos have been saved with a txt extension to avoid being firewalled. Download it then rename the .txt to .mov

Convert your movie to an flv file 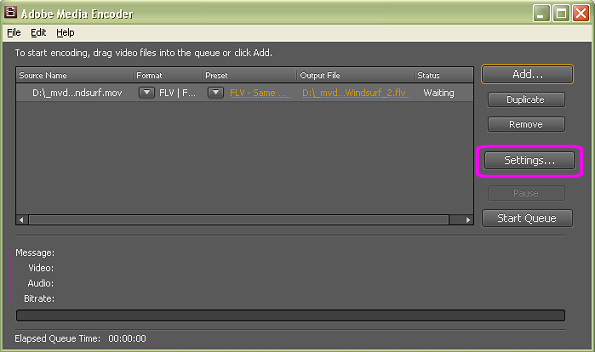 Clicking on [Settings] will show: 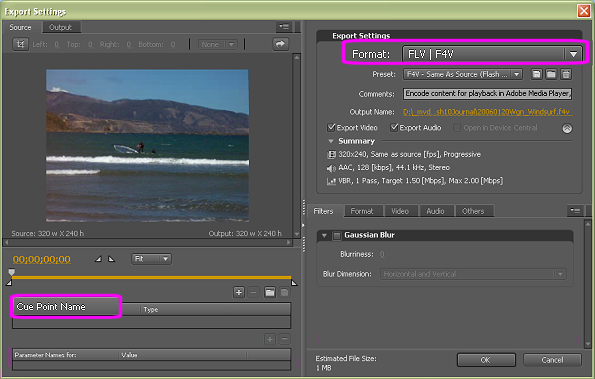 Save the resulting file into the same folder as jnlVideo.fla

Embedded into the flash movie. This is generally not recommended unless the movie is short as it will increase the size of your Flash movie. Embedding the movie into Flash was initially a big advantage over other formats as if you could play Flash, the movie would play (as the Flash codec came with Flash). Embedding allows you to add special effects such as clickable areas onto the running video.

To embed a video use 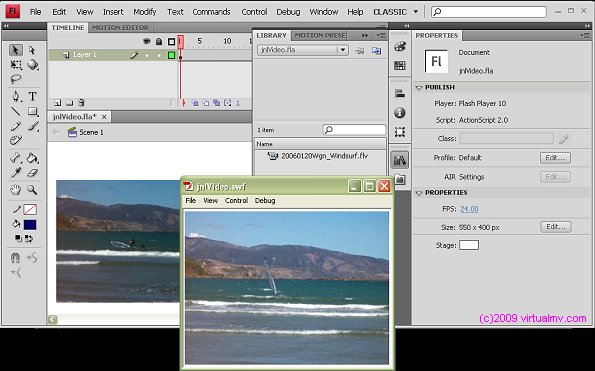 Flash also gives you another way to include video in your Flash Movie, Loading external video with playback component

If you choose this option you will find additional files are created on your working directory. These will need to be copied to the web server (along with the flv file) for the player controls to be included. 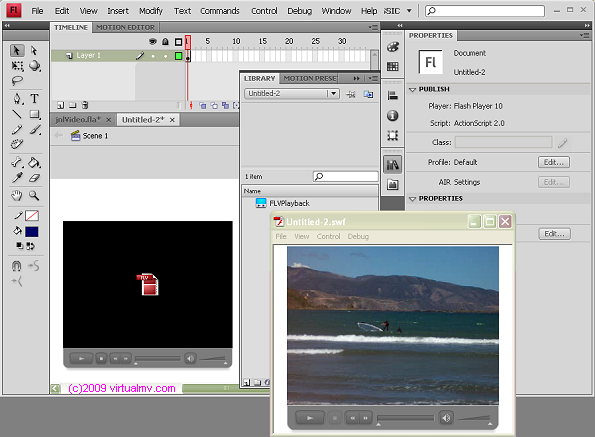 Movie doesn't play when swf copied to another location

There appears to be a pathway problem with this method in Flash CS4. When attempting to play the video back on another computer that does not have the video in the exact pathway as the initial computer it will not play. 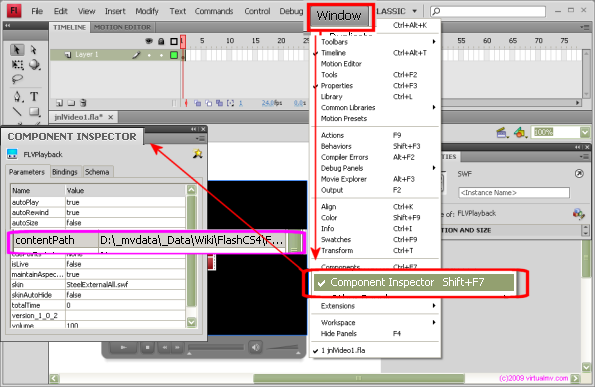 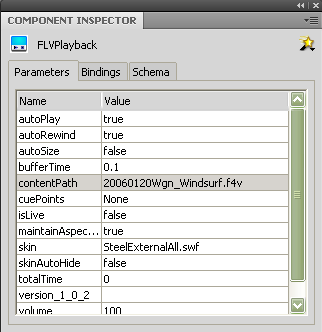 Now test and publish as before, and your video should play as expected on other computers.

Alternatively you can use the buttons to bring up the component inspector: 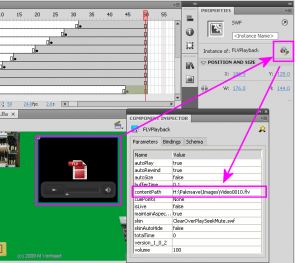