“Sound is perhaps the most sensuous element of multimedia. It is meaningful "Speech" in any language from a whisper to a scream. It can provide the listening pleasure of music, the startling accent of special effects, or the ambience of a mood-setting background. How you use the power of sound can make the difference between an ordinary multimedia presentation and a professionally spectacular one.” Vaughan (1993)[1]

The two main sound file formats imported into Flash are;

Reinhardt and Dowd (2007)[2] discuss each format in detail

A real problem is using wma files. Windows Movie Maker (and I think Sound Recorder) from Windows 7 create only wma files, which are unfortunately not supported by Fash. So they need to be converted first. Some programs you can download and install to perform the conversion are

Once imported into Flash sound files can be edited, then saved in various formats when your flash file is published. Two formats are recommended;

2. Just in case someone has played around in Flash before, reset the layout to the default one.
Select Window > Workspace > Classic/Reset 'Classic' .

4. In the Windows/Media folder on your system, choose one of the sound files (approx 200K), and copy into your journal folder. (you can use the search function in Windows Explorer- right click the Windows folder (usually C:\windows) and search for *.wav files). For the following example I will use the XP Startup file which I have renamed to XPStartup.wav.

Import into the library

Flash does not import a sound into the timeline, instead it manages the file by placing it into its library. The Library panel allows you to place assets (media objects) into it and then the flash movie can access the sound clip. This means that the sound file is loaded only once into a Flash movie and then if required more than once is played from the library. This obviously makes using the sound much more efficient and keeps the movie size down to a minimum as sound files can be quite large.

Note that when playing a movie Flash loads the entire sound file into the computers Memory, so if you have large sound files and low memory on your PC this can cause hardware problems.

Sound can be imported into the library in two ways. 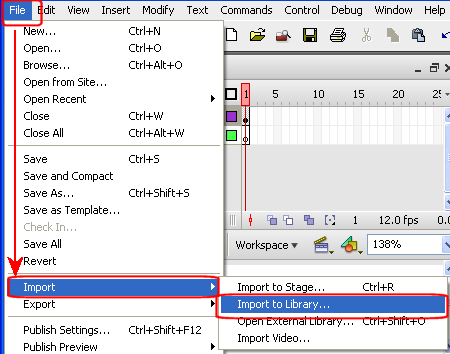 5. In the Windows/Media folder on your system, choose one of the sound files (approx 200K), and copy into your journal folder. For the following example I will use the XP Startup file which I have renamed to XPStartup.wav.

6. Load it into the Library. Your Flash environment should be similar to that shown... 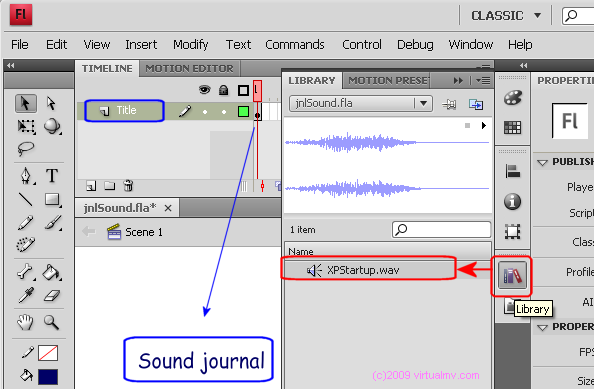 7. Create a new Layer (or rename Layer 1) to BkgroundSnd

Your stage should resemble that shown .. 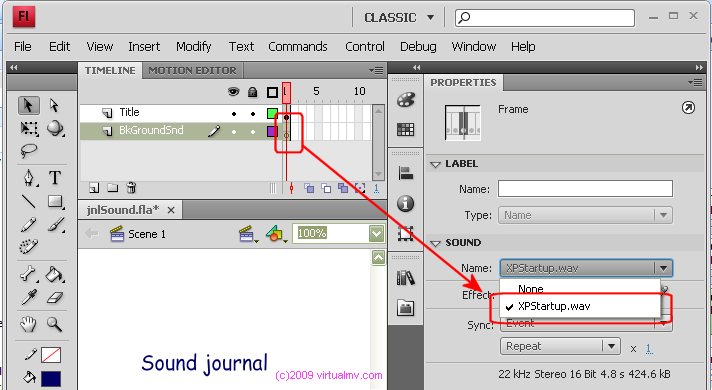 11. Explore some sound effects using the Effects, or the Sync options.

You can add some basic effects to the sound file such as Fade in, Fade out using the effects drop box. 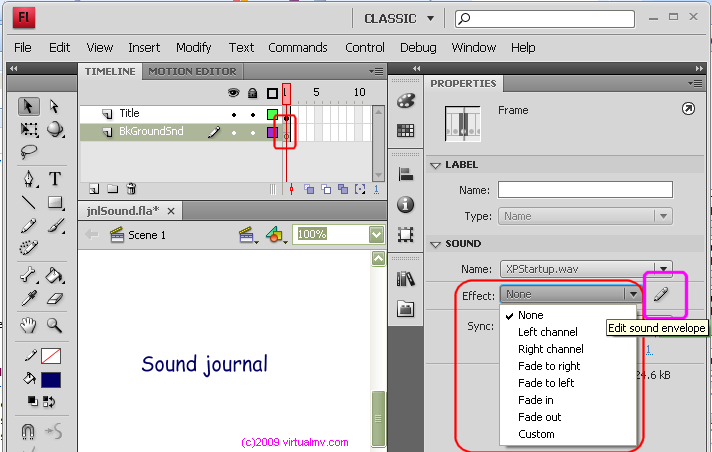 Flash also has a basic built in sound editor. This is accessed by clicking on the frame that contains the sound (as the sound can exist in many places), and in the Property inspector click the pencil next to the Effect Drop box. 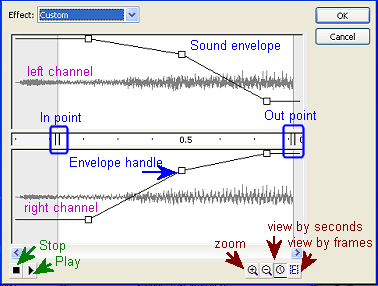 Save, Test and Publish your document

Save and publish this document as jnlSound.fla

1. Use Windows Sound recorder to create an original sound, and replace the “borrowed” sound.