The Case of SchoolNet Namibia/Status

From WikiEducator
< The Case of SchoolNet Namibia
Jump to: navigation, search

SchoolNet Namibia was officially dissolved by its Trustees and membership at a general meeting on 17 July 2009. Much was learned about ICT in schools in an African context during its lifetime (of almost a decade).

The SchoolNet Namibia web site will stay on-line until mid 2011 (or so). Some of the learning will live on through sites like WikiEducator and resources such as this case study, the beginners guide to Oshikwanyama and other resources. 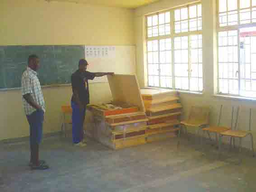 The number of schools in Namibia has grown from about ±1520 in 2000 to a ±1645. The number of schools, other institutions and educational professionals once connected (via wifi, digicon and modem) has declined from its peak of about 500 in 2006 to about 380 in 2009 and not all of those were connected on account of upstream services and other issues. The statistic for schools with electricity appears to be stuck at about 50%. There are many more schools with telecommunications these days, given the phenomenal growth of mobile phone coverage in Namibia's rural areas. However, this does not translate into internet access for these schools, since such GSM wireless services charge on a dollar/megabyte data basis, making it untenable for conventional school internet usage.

The role of SchoolNet Namibia has been assumed by the National Education Technology Service and Support Centre (NETSS Centre) in Windhoek. The design of the NETSS Centre “is based on the deployment and support models of SchoolNet Namibia and Microsoft Pathfinder, as well as a review and analysis of the issues faced by the end users themselves”[1].

It remains to be seen how closely based on the SchoolNet model that is in practice, and how well they grasp and apply the principles outlined in this case study. The public plan looks promising in many respects, but severely lacking in others.

The principles of SchoolNet's model will be undermined if non-free software is promoted in any way. This seems likely. Including highly influential partners with a vested interest in this happening is ethically indefensible.

At the core, the principles are about freedom, equality, diversity, inclusion and self-determination. Compromising on these should not be negotiable.