The Case of SchoolNet Namibia/Operations/Activities/Connectivity

From WikiEducator
< The Case of SchoolNet Namibia‎ | Operations‎ | Activities
Jump to: navigation, search

In February 2002, SchoolNet Namibia established its own Internet Service Provider (ISP) hosted at the Polytechnic of Namibia. Schools could connect via a dial-up modem, through wireless signals via high masts owned by SchoolNet Namibia or Telecom Namibia. Subsidised dial-up rates were negotiated for poorer schools with additional funds from Sida covering the difference.

Later (2004/5), connectivity was to have been enabled via Telecom Namibia with guaranteed “fixed access rates for all schools, irrespective of how they connect.”[1]

The donation to SchoolNet Namibia is in addition to the N$13,5 million (c US$ 2,05m) in assistance pledged by Telecom Namibia at the launch of the XNet Development Alliance Trust in April 2004. The XNet Trust aims to expedite Internet Access and its use to the education, health and development sectors of Namibia, as a key action toward the accelerated development and integration of Information and Communication Technologies (ICTs) in Namibia. Telecom Namibia is a founding member of the XNet Development Alliance Trust.

Under the XNet agreement, Telecom Namibia will take on and support SchoolNet's connectivity roles in relation to schools, installing landlines or wireless solutions, and offering a standard discounted access rate (24/7 internet access) to all schools participating in the SchoolNet scheme, nation-wide. SchoolNet will manage the relations with schools, to ensure that schools that have access also have appropriate computers and skills to use them.

The challenge on the ground was making it possible for schools to use this facility. Many schools did not have telephone lines and some did not even have electricity (see the section on Power below). Almost all of Namibia's population is concentrated in Windhoek, the relatively well resourced capital, and in the north of the country around Ongwediwa, Ondangwa and Oshikati.

By the end of a three year 10-phase process ending in 2005, the infrastructure would serve an area of 54,000 km2 comprising 90% of the region bounded by Ruacana to the west, Katima Mulilo in the east, beyond the Angolan border in the north and south to Oshivelo. There were 793 schools in this region at the start of the process.

The project would require an investment of N$23 million, a fixed capital cost for 24 hour, seven-days-a-week connectivity.

To be cost-effective, at least ten schools would need to lie within a 20km radius of a single tower. The cost could be amortized over a large number of schools such that that the cost, over ten years, would be an affordable US$18 a month - a fraction of the US$400 monthly costs of running satellite feeds, the only other wireless solution available in Africa at the time.

Initial effort was focused in the North.

During the research/ pilot phase, a SchoolNet / Netcorps volunteer, Kyle Johnson, had already set up wifi with their own 2.4 gHz implementation around Ondangwa, Oshakati and Okahao with 19 schools participating.

The first phase of implementation involved replacing this existing set-up with a narrow-band radio signal solution which extended the cover to about 220 schools of which ±100 were given wifi internet equipment during the roll-out period. Four towers, the largest of which stretched 125 meters above Oshakati, formed the northern network's backbone. From there, schools located up to twenty kilometres afield of a radio hub would be able to send email, surf and chat on the internet at speeds often faster than those available over a dial-up connection. The facility at Ondangwa anchored the wireless network to the wired internet via a dedicated fibre-optic connection.

The plan for Phase 2 was to reach 180 additional schools by adding three new sites (Uutapi, Ogongo and Ohangwena) and upgrading the one at Okahao for better coverage. Phase 3 would add 5 new sites (Onesi, Omungwelume, Eenhana, Okongo and Omuthiya) reaching an additional 100 or so schools.

Smaller broadcast networks were planned for the southerly Keetmanshoop, the coastal towns of Swakopmund and Walvis Bay, and to a greater number of schools in Windhoek.

Based on the early work in the north, the model proved viable for Namibia, but whether the model would work in other countries without modification remained to be seen. “Namibia's small but dense population gives it a distinct advantage”, said SchoolNet Africa's Shafika Isaacs. "It's about scale. When we talk about Namibia, we're talking about 1 500 schools. When we talk about (giving wireless coverage in) Ghana, we're talking about 32 000…. Is this a solution for all places in Africa?" (quoted on SchoolNet's web site[5]).

Namibia's population may be small, but it is only “dense” in Windhoek and other smaller conurbations, and more losely across the sprawl of Oshakati, Ongwediva and Ondangwa. The rest of Namibia has a very sparsely distributed population. I think Shafika was correct to ask whether the wifi model that we had adopted then for urban schools and the Ovamboland complex (2003) would scale to the far greater densities of schools in countries like Ghana. 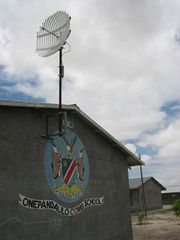 Subscriber Unit
In Namibia, the number of connected schools, other institutions and educational professionals connected (via wifi, digicon and modem) peaked at around 500 in 2006. At that time, the (on-going) saga with XNet and Telecom had begun (see Appendix 3: The Ongoing XNet and Telecom saga ) and many schools were “waiting for network”[6] (to be rolled out by Telecom in phases 2 and 3). In this scenario, the best hope would be for the number of connected schools (etc.) to at least remain constant. However, the number declined after SchoolNet physically switched off their internet service in April 2009. It is unknown (September 2010) how many schools might have subsequently regained internet access since then.
Retrieved from "https://wikieducator.org/index.php?title=The_Case_of_SchoolNet_Namibia/Operations/Activities/Connectivity&oldid=621896"
Category: