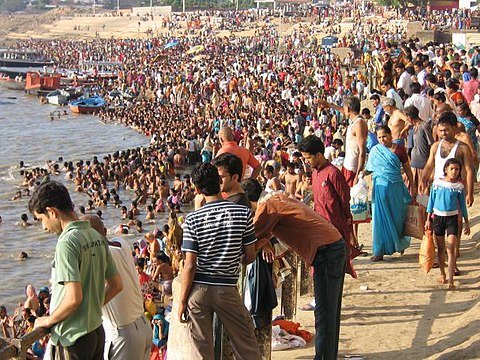 Note that the birth and death rate is the number per thousand, whereas the population growth rate is in percent (per hundred). Therefore,

Age Distribution
number of people of each age in a population 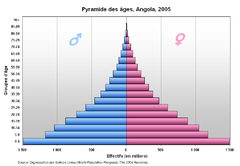 Angola has a high growth rate (2.8%). Population is very young 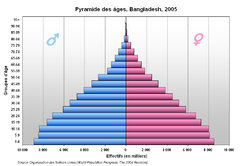 Bangladesh used to have growth rate, but has slowed recently (currently 1.6% 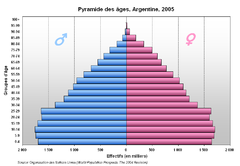 Argentina is a slow growing country (1.0%). Note the contracting of the population below 15 years age 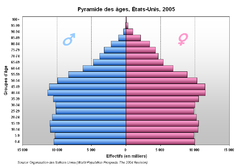 The USA has a growth rate about the level of Argentina (0.9%), but has had slow growth rate for a longer period 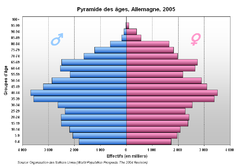 Germany has a negative growth rate (-0.1%). The population is older

Immigration
movement of population into an area

Emigration
movement of population out of an area

Then the total population growth rate is then

Migration is usually not a significant factor except where war or other conditions cause mass movement of people.

The two best indicators of the quality of health care are infant mortality and life expectancy.

the average number of years a newborn can expect to survive

number of children born per woman in her lifetime

number of children born to parents to replace them

more than 2.0 since some women die before bearing children or choose not to have children

If the total fertility rate exceeds the replacement rate, then the population growth rate will rise (and vice versa). Note there will be a delay between the two.

The number of members for each generation increases geometrically = 2x2x2x...

After the lag phase we then get the exponential growth phase also called the log phase.

Finally the birth and death rates will begin to approach each other. This leads to a deceleration phase followed by a stable equilibrium stage.

Humans have had a long lag period. It took until 1800 to reach 1 billion people. Then the second billion only took 130 years.

In the last eighty years population has increased from 2.0 to 7.8 billion. 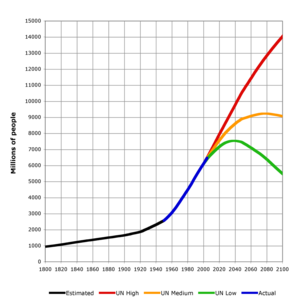 Doubling Time
Time for the population to double in size

In the discussion below what we call effects are the effects of increased population on the environment. Factors are what causes population growth rate to increase.

The role of children in the economy is important in determining birth rate.

Many families feel they need children to help raise income. For example, farmers families are often large because the children can help on the farm.

Another important point is the cost of raising and educating children. Where the costs are higher, then couples will often delay having children until they are financially better off.

Fertility rates have a direct correlation to women's education. The education of women is the single most important factor in reducing the world's population growth.

Attitudes toward birth control vary widely around the world. The most important point is to give women choice in when to have a family and how large it will be.

As mentioned above the best indicators of public health are infant mortality and life expectancy.

Life expectancy has generally risen over the years. However, recently it has decreased in Africa due to the AIDS epidemic. In some African countries up to one-third of adult are infected with HIV.

The government's policy toward population growth can be very important. Some countries (for example, Thailand, China, and Bangladesh) have encourage family planning, etc. Other countries (such as Singapore) have encouraged people to have more children.

It has a family planning program supported by the government, the Buddhist church, and nonprofit organizations. Program led by Meechai Viravidaiya aka Mr. Condom.

Thailand also has good educational and employment opportunities for women and a good health care system for mothers and children.