Biodiversity
The variety of living things in a region

There are three kinds of biodiversity:

Ecosystem services are the benefits provided by ecosystems that contribute to making human life both possible and worth living. 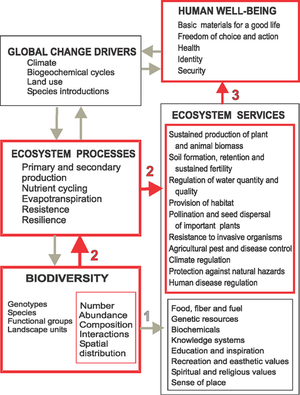 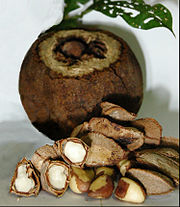 Brazil nuts are a good example of the importance of food as an ecosystem service, as all Brazil nuts must be harvested from the wild as they required to be pollinated by large bees which are not present in disturbed areas. They are spread by Agouti who eat some the nuts and bury the uneaten ones. These will then germinate into new trees.

One hectare of loss rainforest leads to the loss of US$40 in revenue from Brazil nuts.

Watch this video from IUCN 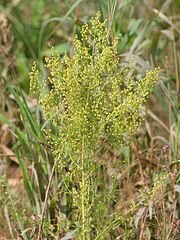 The major drug used to treat malaria is Artemesinin.

Its source is the plant Artemesia annua.

An example of pollination as an ecosystem service is the honey bee. They are extremely important pollinators of crops.

However, honey bees are under serious threat from the disease colony collapse disorder:

One area that is becoming a hot topic in wildlife conservation is:

Payment for ecosystem services (PES) Payment to a landowner, farmer, or community for the benefits recieved from the ecosystem

Species names are given as Genus species. Both words are in italic, the first is always capitalized, the second is never capitalized.

There are also intermediate levels - for example, from family to order: family, superfamily, infraorder, suborder, order

Can you answer the following questions? Click on the link to find out.

However, we know that we have not identified all the species. A recent estimate is that that are about 8.7 million species extant. (See table below) [2]

The following show the distribution of species across various taxon.

Endangered species Those species which are at risk of extinction.

A good case study on extinction is the Passenger Pigeon.

It was in the nineteenth century one of the most abundant birds, with some estimates at 5 billion birds. However, by 1914, the last one had died in a American zoo.

Why the sudden decline? Hunting. It was commercially hunted for its meat. Since they flew in huge flocks (millions of birds) they were easy targets.

Deforestation also contributed to their decline.

The International Union of Conservationists (IUCN) evaluates species to determine how endangered they are. These evaluations are collected into the IUCN Red List.

The categories vulnerable, endangered, and critically endangered are often grouped together as Threatened.

Important in endangered species is to prevent trading in wildlife. The main instrument for this is the Convention on International Trade in Endangered Species of Wild Flora and Fauna (CITES). This is a legal treaty which restricts or prevents trade in certain species. The list of species can be found here.

The WWF has identified 14 biomes:

There are also 13 freshwater biomes and 5 marine biomes

WWF further divides the Earth into 867 terrestrial and 450 freshwater ecoregions:

for a larger and more readable version go here

Mangroves forests are a type of woodland found in saline coastal waters, mostly in the tropics. The 2010 World Mangrove Atlas shows a 20% loss since 1980. Shrimp farming accounts for about 25% of that.

The major threats to biodiversity are (in order of importance):

As for deforestation, a 2018 study[6] shows that the major drivers are:

The above are global values, for specific regions the major drivers are:

A serious problem is invasive species - plants and animals not native to an area and disrupt the ecosystem.

In order to protect biodiversity we need to:

For marine ecosystems all of the previous section apply, but there are some special considerations:

When studying biodiversity sometimes we need to make priorities for what to study. One way is to use the concept of Hotspots.

Some areas have greater biodiversity than others. Tropical rain forests, mangroves, and coral reefs are examples with high biodiversity.

One of the best list of hotspots is Conservation International's Biodiversity Hotspots. They have identified 35 areas which are both highly diverse and face serious threats. They have also identified 5 other areas with high biodiversity, but with fewer threats. 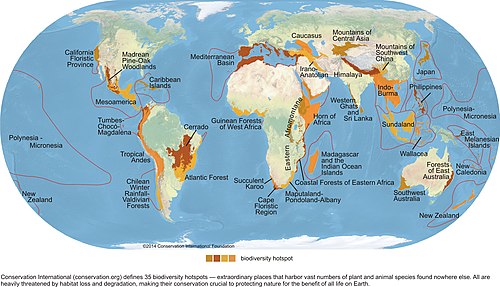 The most important of the methods for protecting biodiversity is protected areas, also called bioreserves.

IUCN classifies protected areas into categories. These categories are (more details can be found HERE):

In addition to protecting wildlife, it is also important to restore already degraded areas.

Methods of restoration include:

With current practices in agriculture:

Plants and animals are bred to have different genetic traits. These traits either:

Little genetic diversity in an agricultural species can lead to susceptibility to a disease wiping out the entire crop.

An example of this happening is the Potato famine in Ireland.