Safe drinking water and sanitation are two of the most important indicators of quality of life. They make up Goal 6 of the Sustainable Development Goals.

The source of pathogens in water is human and animal wastes. Since here we are talking about waterborne diseases, if they are found in water they must originate from the gut of either animals or humans.

They can cause some very serious diseases, such as amoebic dysentary, typhoid, polio, and cholera.

Coliforms are only naturally found in the gut of animals (including humans). Therefore, we can use the concentration of coliform in water as an indicator of possible presence of pathogens. The coliform test is a very commonly used test for water pollution.

Dissolved Oxygen - Oxygen which is dissolved in the water

It is necessary for fish and other aquatic organisms to survive. Often it is the limiting factor for these species.

A major fish kill in Brazil

The measure of the amount of oxygen-demanding wastes is the Biological Oxygen Demand (BOD). It is the amount of dissolved oxygen needed by aerobic decomposers to break down organic matter at 20 degrees Celsius in 5 days.

Ironically, nutrients - especially nitrates and phosphates - can cause water pollution.

Excess nutrients can cause a condition called eutrophication.

An algae bloom in a pond in N. Carolina, USA

Fine particles can become suspended in the water column. The main source is soil erosion. 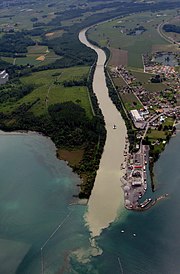 Rhone river flowing into Lake Geneva, notice the brownish-grey sediment flowing out of the river

They can have a number of effects:

Water used to cool power plants and other industries is often released to rivers or lakes. 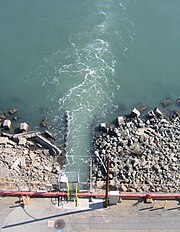 Outflow of water from the Potrero Power Plant. This is thermal pollution

This hot water changes the water temperature. This in turn lowers dissolved oxygen and disrupts the normal activity of aquatic organisms.

Toxic chemicals can cause a variety of health effects. They can also harm fish and wildlife. 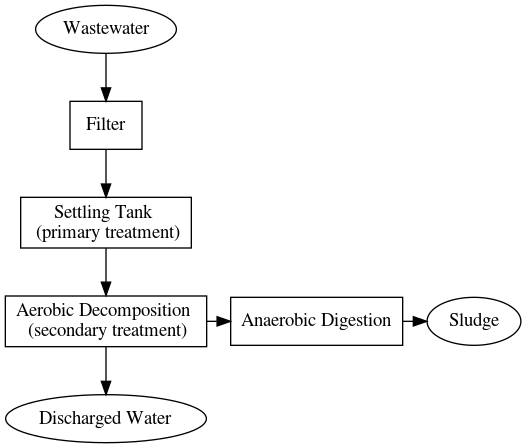 Let us look at the above components individually:

Some other parts may also exist: