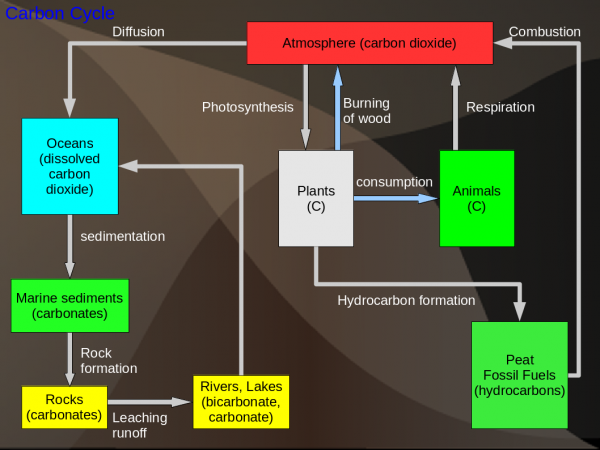 Sinks: The biggest store of Carbon is in living organisms (organic matter). The carbon in the atmosphere is important for its role in global warming. However, the oceans actually hold more carbon dioxide than does the atmosphere.

Notes: The carbon dioxide in the atmosphere is absorbed by the ocean due to the concentration difference between the air and the sea, this is called diffusion. This carbon dioxide is then used by shellfish to construct their shells. After the shellfish they die and fall to the ocean floor to form sediment. This sediment over time gets converted to carbonate rocks. Hydrocarbon formation is similar but in this case plants are converted to fossil fuel due to high temperatures and pressures deep underground.

Global Warming: Almost all of global warming is due to burning of fossil fuels. Referring to the diagram, the problem is that the removal processes cannot remove carbon dioxide as fast as it is generated. This can summed up by the following: input - output = accumulation. 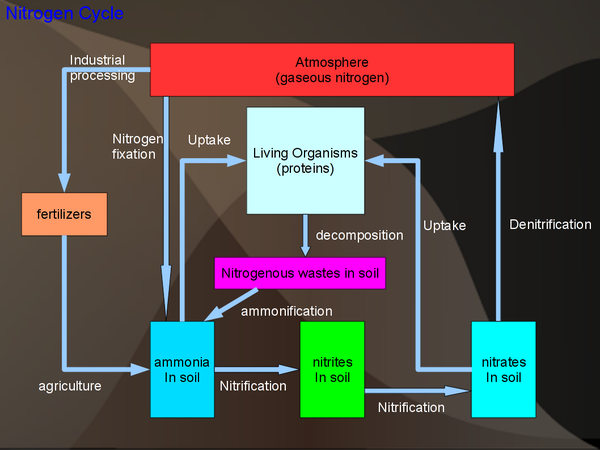 Sinks: The biggest source of nitrogen is the atmosphere (78% of the air is nitrogen). Nitrogen is also an important part of living organisms as all protein contain nitrogen.

Notes: Most of the nitrogen cycle is driven by the fact that living organisms cannot use nitrogen directly from the air. Instead bacteria convert the nitrogen gas to ammonia/ammonium and then to nitrate. Note that the ammonia can only be taken up by a few plants, most notably the legumes.

All of these process (along with ammonification) are bacteria driven. 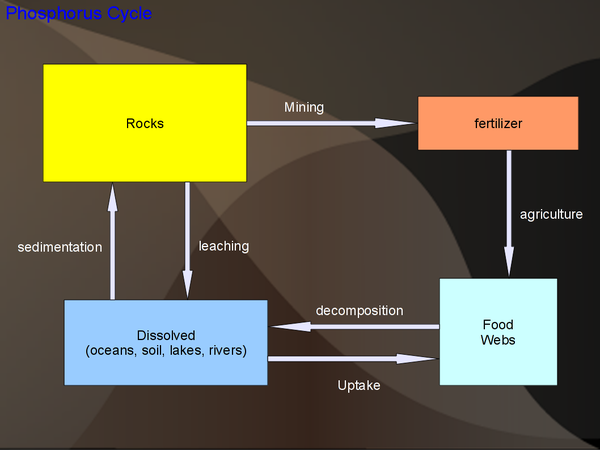 Eutrophication: Eutrophication is a condition due to high-levels of nutrients in water, especially phosphorus. This is often caused by excessive fertilizers, which if not taken up by the food web, transfer directly to the water. Other human sources of phosphorus are sewage and detergent.

For a interactive version of these diagrams open this file