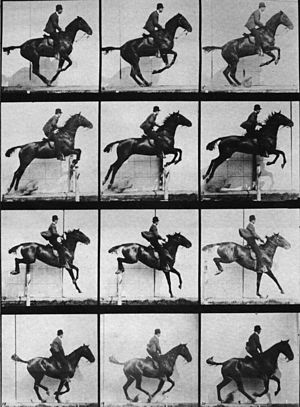 Eadweard Muybridge, "Sequence of a horse jumping", 1887.
With traditional film, what we see as a continuous moving image is actually a linear progression of still photos on a single reel that pass through a lens at a certain rate of speed and are projected onto a screen. We saw a simple form of this process earlier in the pioneering work of Eadweard Muybridge.

The first motion picture cameras were invented in Europe during the late nineteenth century. These early “movies” lacked a soundtrack and were normally shown along with a live pianist, organ player or orchestra in the theatre to provide the musical accompaniment. In the United States, film went from being a novelty to an art form with D. W. Griffith’s Birth of a Nation in 1915. In it Griffith presents a narrative of the Civil War and its aftermath but with a decidedly racist view of American blacks and the Ku Klux Klan.

Film scholars agree, however, that it is the single most important and key film of all time in American movie history - it contains many new cinematic innovations and refinements, technical effects and artistic advancements, including a color sequence at the end. It had a formative influence on future films and has had a recognized impact on film history and the development of film as art. In addition, at almost three hours in length, it was the longest film to date.[1]

Unique to the moving image is its ability to unfold an idea or narrative over time, using the same elements and principles inherent in any artistic medium. Film stills show how dramatic use of lighting, staging and set compositions are embedded throughout an entire film. For comparison, see the work of Cindy Sherman. 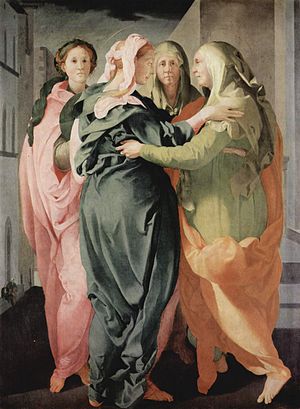 Jacopo Pontormo, The Visitation, 1528. Oil on canvas, The Church of San Fancesco e Michele, Carmignano, Italy.
Video art, first appearing in the 1960’s and 70’s, uses magnetic tape to record image and sound together. The advantage of video over film is its instant playback and editing capability. One of the pioneers in using video as an art form was Doris Chase. She began by integrating her sculptures with interactive dancers, using special effects to create dreamlike work, and spoke of her ideas in terms of painting with light. Unlike filmmakers, video artists frequently combine their medium with installation, an art form that uses entire rooms or other specific spaces, to achieve effects beyond mere projection. South Korean video artist Nam June Paik made breakthrough works that comment on culture, technology and politics. Contemporary video artist Bill Viola creates work that is more painterly and physically dramatic, often training the camera on figures within a staged set or spotlighted figures in dark surroundings as they act out emotional gestures and expressions in slow motion. Indeed, his work The Greeting (video, 28 sec) reenacts the emotional embrace seen in the Italian Renaissance painter Jocopo Pontormo’s work The Visitation shown at right.

Computers and digital technology have, like the camera did over one hundred and fifty years ago, revolutionized the visual art landscape. Some artists now use digital technology to extend the reach of creative possibilities. Sophisticated software allows any computer user the opportunity to create and manipulate images and information. From still images and animation to streaming digital content and digital installations, computers have become high tech creative tools.

The work of German artist Jochem Hendricks combines digital technology and human sight. His eye drawings rely on a computer interface to translate the process of looking into physical drawings.

Digital technology is a big part of the video and motion picture industries with the capability for high definition images, better editing resources and more areas for exploration to the artist.