The darkroom became the studio of the photographer. It was there where visual ideas translated into images: an opportunity to manipulate the film negative, to explore techniques and discover the potential the photograph had in interpreting objects and ideas. 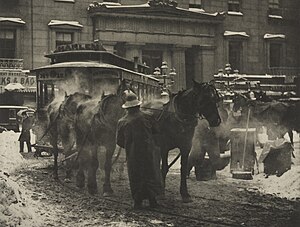 Alfred Stieglitz, The Terminal, 1892
Alfred Stieglitz understood this potential, and as a photographer, editor and gallery owner, was a major force in promoting photography as an art form. He led in forming the Photo Secession; in 1902, a group of photographers who were interested in defining the photograph as an art form in itself, not just by the subject matter in front of the lens. Subject matter became a vehicle for an emphasis on composition, lighting and textural effects. His own photographs reflect a range of themes. The Terminal (1892) is an example of straight photography: images from the everyday taken with smaller cameras and little manipulation. In The Terminal, Stieglitz captures a moment of bustling city street life on a cold winter day. A massive stone façade looms in the background while a half-circle of horses and street wagons are led out of the picture to the right. The whole cold, gritty scene is softened by steam rising off the horses and the snow provides highlights. But the photo holds more than formal aesthetic value. The jumble of buildings, machines, humans, animals and weather conditions provides a glimpse into American urban culture straddling two centuries. Within ten years from the time this photo was taken, horses will be replaced by automobiles and subway stations will transform a large city’s movement into the twentieth century.


Other photographs by Stieglitz concentrate on more conceptual ideas. His series of cloud photos, called Equivalents, are efforts to record the essence of a particular reality, and to do it “so completely, that all who see [the picture of it] will relive an equivalent of what has been expressed”. His Equivalents photos establish a new level for the aesthetic content of ideas, and are essentially the first abstract photographs.