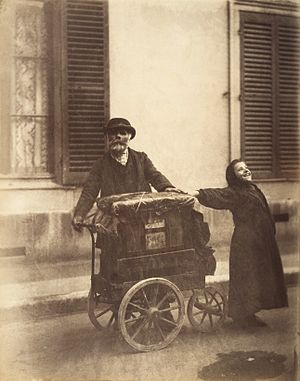 Eugène_Atget, Street Musicians, 1899-1900. Albumen silver print from glass negative.
became the most contemporary of artistic media, one particularly suited to record the human dramas being played out in an increasingly modern world. French photographer Robert Doisneau’s The Kiss on the Sidewalk from 1950 shows a romantic kiss as an oasis in the middle of a busy Paris sidewalk. That the photo was not spontaneous but a reenactment takes nothing away from the emotional content: Paris as the city of Love.

Eugène Atget (pronounced “Ah-jay”) (1856-1927) was one of the first to use the photograph as a cultural and social document. His images of Paris and its surroundings give poetic witness to the buildings, people and scenes that inhabit and define the city.

The work of Diane Arbus (1923-1971) challenges us as we gaze at others who are deviant, marginalized or stand out because of the context in which we see their normality. Arbus’ lens is unflinching in its honesty. She presents images of strangeness and alienation without condescension or judgment. It’s up to us to try to fill in the blanks.

Many of the photographs in Robert Frank’s series, The Americans, depict groups of people in different situations, including riding a bus, watching a rodeo and listening to a speech. His photo essay on American life is seen through the eyes of an observer, not a participant. Instead of voyeuristic, they give a sense of detachment. Only a few of the figures look directly into the camera or directly at other people in the photo. Frank worked hard to maintain the observer’s point of view. Similar to Arbus, the photographs carry overtones of alienation – between the individual and the group. Controversial when first published in the United States in 1959, the book now is seen as one of the most important modern photographic social commentaries.