Impact on other media 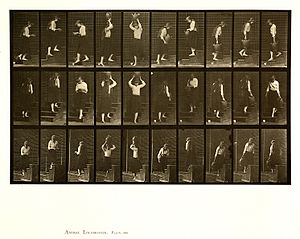 Eadweard Muybridge, “Ascending and Descending Stairs”, Plate 504 in Animal Locomotion, 1887. Collotype
The advent of photography caused a realignment in the use of other two-dimensional media. The photograph was now in direct competition with drawing, painting and printmaking. The camera turns its gaze on the human narrative that stands before it. The photograph gave (for the most part), a realistic and unedited view of our world. It offered a more “true” image of nature because it is manifest in light, not by the subjective hand and mind of the artist in their studio, which, depending on the style used, is open to manipulation. Its use as a tool for documentation was immediate, which gave the photo a scientific role to play. Talbot’s photogenic drawings of plant species became detailed documents for study, and the “freeze frame” photos of Eadweard Muybridge helped to understand human and animal movement. But the relative immediacy and improved clarity of the photographic image quickly pitted the camera against painting in the genre of portraiture. Before photography, painted portraits were afforded only to the wealthy and most prominent members of society. They became symbols of social class distinctions. Now portraits became available to individuals and families from all social levels.

Let’s look at two examples from the different mediums to compare and contrast.

Gilbert Stuart’s 1809 painted portrait of Mrs. Harrison Gray Otis (above, left) not only records the sitter’s identity but also a psychological essence. There is a degree of informality in the work, as she leans forward in the chair, a shawl draped over one shoulder, hands clasped, with raised eyebrows and a slight smile on her lips. Her amusement is palpable and endearing.

In the photographic portrait of the English actress Ellen Terry (above, right), Julia Margaret Cameron captures the same informality and psychological complexities as Gilbert does, except this time the sitter leans against a patterned background, a simple white gown slips off her shoulders as she gently grasps a necklace with her right hand. Here the sitter’s gaze is cast downward, unsmiling, in a moment of reflection or sadness. The lighting, coming from the right, is used to dramatic effect as it illuminates the left side of Terry’s body but casts the right side in shadow.

One obvious difference is the lack of color in Cameron’s photo. Her use of black and white creates a graphic composition based on both dramatic and subtle changes in value. The first color photographs were developed as early as the 1860’s, but these early processes were impractical and of little value. Painters worried that this new medium would spell the end to theirs. In reality, early photographers were influenced by popular styles of painting in creating their own compositions. Cameron’s staged photograph Queen Esther before King Ahasuerus from 1865 (below, left) mimics the Symbolist paintings of the time in both style and subject matter. They used mythology, dramatic poses and other Romantic themes to create visual worlds with dream like figures and dark emotions. You can see the similarity between Cameron’s photograph and George Frederic Watts’ painting Paolo and Francesca (below, right) from about the same time. 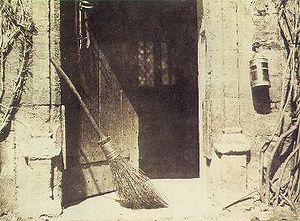 William Henry Fox Talbot, "The Open Door" in The Pencil of Nature, 1844
It didn’t take long for photographers to see the aesthetic value in the new medium. As early as 1844, Henry Talbot was taking pictures with a concern towards formal composition. The Open Door uses mundane subject matter to create a study in contrasts, visual balance and textures. The solid composition, anchored by the dark rectangle of the door and interior space book ended by sunlit areas, becomes animated with diagonals created in the heavy shadow cast on the door. The broom’s placement and its shadow reinforce this. Vines cropped on each side of the photo’s frame give balance, and the broom straw, stone work and door hardware create visual textures that enhance the effect. Finally, the lamp hanging near the right edge of the frame creates an accent that draws our eye.

Early photographs were made from single plates of metal, glass or paper, each one painstakingly prepared, exposed and developed. In 1884, George Eastman invented transparent roll film; strips of celluloid coated with a light-sensitive emulsion. Four years later, he developed the first hand held camera loaded with roll film. The combination brought access to photography within the reach of almost anyone. Additional advances were made in lens optics and shutter mechanics. By the turn of the nineteenth century, the photograph represented not only a new artistic medium but also a record -- and a symbol -- of the Industrial age itself.