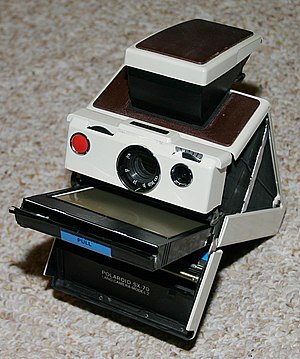 Polaroid SX-70 Instant Camera
Edwin Land invented the instant camera, capable of taking and developing a photograph, in 1947, followed by the popular SX-70 instant camera in 1972. The SX-70 produced a 3” square-format positive image that developed in front of your eyes. The beauty of instant development for the artist was that during the two or three minutes it took for the image to appear, the film emulsion stayed malleable and able to manipulate. The artist Lucas Samaras used this technique of manipulation to produce some of the most imaginative and visually perplexing images in a series he termed photo-transformations. Using himself as subject, Samaras explores ideas of self-identity, emotional states and the altered reality he creates on film.

Digital cameras appeared on the market in the mid 1980’s. They allow the capture and storage of images through electronic means (the charge-coupled device) instead of photographic film. This new medium created big advantages over the film camera: the digital camera produces an image instantly, stores many images on a memory card in the camera, and the images can be downloaded to a computer, where they can be further manipulated by editing software and sent anywhere through cyberspace. This eliminated the time and cost involved in film development and created another revolution in the way we access visual information.

Golden Gate Bridge retouched with painterly light effects
Digital images start to replace those made with film while still adhering to traditional ideas of design and composition. The image at right is a photograph of the Golden Gate Bridge that has been retouched to create light effects traditionally used in paintings. The photograph also uses many of the artistic elements and principles that you learned about in Unit 3 in its composition.

In addition, digital cameras and editing software let artists explore the notion of staged reality: not just recording what they see but creating a new visual reality for the viewer. Sandy Skoglund creates and photographs elaborate tableaus inhabited by animals and humans, many times in cornered, theatrical spaces. In a series of images titled True Fiction Two she uses the digital process – and the irony in the title to build fantastically colored, dream like images of decidedly mundane places. By straddling both installation and digital imaging, Skoglund blurs the line between the real and the imagined in art.


The photographs of Jeff Wall are similar in content – a blend of the staged and the real, but present them selves in a straightforward style the artist terms as “near documentary”.