As part of COL's Healthy Communities programme, this project is working with multiple stakeholders to design and implement health learning programmes using participatory content development for a network of community FM radio stations in one province of Solomon Islands. It builds on earlier work under Learning4Peace where a community of practice was built to support youth networks to develop radio content linked to Isabel Province's Youth Policy. One unusual feature of the activity is that it leverages rural networking using People First network email stations, to connect the participants with the wider group of stakeholders, and provide learner support.

From March to June 2009, Commonwealth of Learning collaborated with the Solomon Islands, Isabel Province Ministry of Community Affairs and eight rural communities to build their capacity to produce educational radio programmes. Six workshops have been run involving more than 40 people. In October and November additional workshops involving another 40 people were held to design and develop content and skills for health learning programmes.

Isabel has eight community radio stations around the Province, networked with PFnet email stations and a distance learning centre (DLC). This is unique in the Pacific and beyond, and if the collaboration between content providers, community media practitioners and policy makers is developed, could become a powerful tool for development and a model for the region. A diagram is shown below: 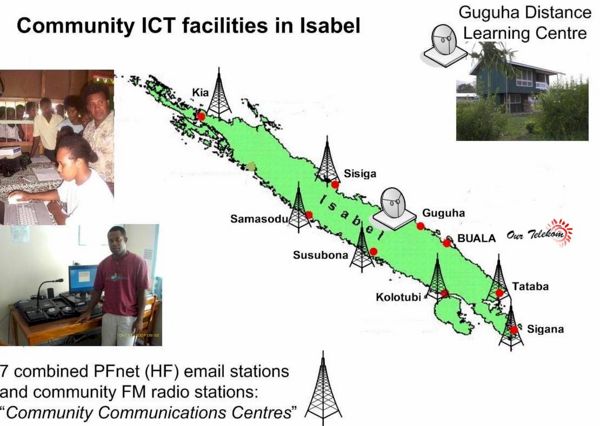 The first part of this programme under COL's Learning4Peace, was aligned with Isabel Province's Youth Policy and Action Plan, and focused on issues affecting and of interest to Youth with a mind towards peace building. For more details see here.

A workshop was held in March to identify four main issues for the radio programmes. This was attended by Youth Coordinators from eight Wards containing FM stations. This was followed up with a technical workshop in Honiara, hosted by SIDT, where email and FM operators learned how to use participatory methods to involve the community in the radio programme production, and methods for planning the content.

Two workshops were then held in Sigana and Tababa communities, involving also the Kolotubi, Lelegia, Buala and Susubona stations, to help the FM operators develop the radio programme ideas with the Youth members. The process was completed in June when four radio programme ideas were developed and one programme, entitled “highlighting our customs”, was completed and aired on several FM radio stations.

The participants were supported through networking by email Google group and a Ning site. The programme has created a “community of practice” using email to communicate and involve a wider range of stakeholders. Over 90 members from Isabel, Honiara and beyond are now joined to this email group.

Using funds donated by AusAid’s Community Sector Programme (CSP), each radio station has been given a small laptop computer, digital voice recorder, CD burner with CDs and headset to enable them to start rudimentary digital editing and to allow them to record and share their programmes around the island. A Distance Learning Centre with broadband Internet access at Guguha will be involved in coordinating this sharing of content.

Following another COL initiative involving the Ministry of Health, Health Promotion Division, it was identified that health promotion would make a very good subject for participatory FM radio programme development. The MoH wishes that more 2-way communication is involved in their health promotion. This has led to a second phase of the COL project, involving the Isabel Health Services Department.

As a small pilot to extend the programme to other provinces, some assistance is also being given to a community radio project in Marovo Lagoon, Western Province. Details are given below.

I accompanied both Walter and Joseph Major (SIDT) to the mentoring visit to both Tataba and Sususbona on their invitation – and budget. Main issues discussed:-

We took with us the repaired transmitters. These were both paid for by their station support budget. These were refitted and both worked well when tried. At Susubona, they re-run the “Na au fa keli” programme. Susubona also received their cleaned netbook computer, as did Lelegia – delivered to them enroute to Susubona from Tataba.

Both Tataba and Susubona received the first tranche of their budget. SB$5,000.00

On 10th January, Tony and Walter left to conduct the two workshops back to back. These are being conducted in partnership with Isabel Province and Isabel Health Services, and participants from Sisiga PFnet and Samasudu FM and PFnet are attending. (report DL Jan 16 2010)

The workshop was successful in planning a 3-month collaborative programme for the development of 4 health learning programmes for targeted sections of the community, concerning 3 selected health priorities. A series of workshops is following to provide training in content skills, technical skills, monitoring, sustainability and governance (see below).

The programme has brought together several stakeholders, and the collaboration will help Isabel Province to make use of this powerful medium in all of its programme sectors. In doing so, it is hoped that the role that each partner can play will become clearer, and the networks will become more relevant and useful to the communities and thus more sustainable.

Link to report is at top of page.

The Isabel Email-FM stations need better defined structures and systems for their operations, ones that are agreed on by all stakeholders, in particular IPG and the local committees. For this purpose a general operating plan (covering governance, roles and responsibilities, and a sustainability plan) will be presented in November 2009 to IPG and the Email-FM committees.

The stations and their community partners also have many needs in skills training and programme/organisational development to strengthen the governance, operations and programming of the stations. Between November 2009 and June 2010 the following workshops and activities are planned:

As a way of helping to extend the model to other provinces of Solomon Islands, the current programme includes a small activity at Patukae Community College, Marovo Lagoon, in Western Province. With funding from the Secretariat of the Pacific Community (SPC), a community FM radio station is to be added to an existing ICT programme involving a VSAT (under SPC's Rural Internet Connectivity Programme), a wide area Wi-Fi network connecting other communities, schools and clinics, and the Ministry of Education's One Laptop Per Child country trials. 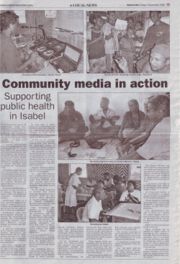