Using Audacity/Fading in and out

Fading tracks in and out is a technique often used on music tracks that you may want to add to your podcast to make it more interesting. Fading music out somewhat so that it continues to play in the background but that a speaking track can still be recognised is a useful skill to learn to create an interesting and richer podcast. There are a couple of methods for achieving this. 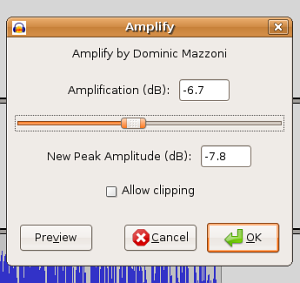 Select the part of your track that you wish to fade then select Effect from the main menu, then Amplify.

In the dialog that opens move the Amplification slider down (left) to about -10dB. Then either preview and adjust or hit ok.

This method may end up sounding a bit abrupt. To avoid this it may be desirable to select a smaller section of track just before the previously faded selection and then select Effect --> Amplify again, this time selecting a slightly larger number on the Amplification slider like -4dB and then doing a similar modification to a section after the originally faded selection.

to control how tracks fade in and out.

This method is harder to master but can achieve much finer control over how and when tracks are faded in and out.

In the figure above, there are four control points. Each control point has up to four "handles" arranged vertically. The top and bottom handles are positioned at the target volume, and the middle handles are positioned a quarter-screen down, giving you a way to move the envelope above the 1.0 level. In this example handle #2 has been lowered to decrease the volume or fade the track out until it reaches handle #3 at which point it will increase in volume to its original level. This type of fading a track in and out can give you a much nicer transition and control over the levels than the previous method.