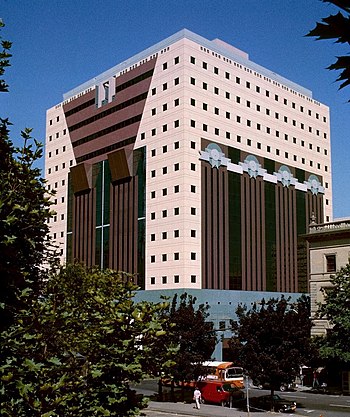 Michael Graves, Portland Municipal Services Building, 1982. Portland, Oregon, USA
Postmodern architecture began as an international style whose first examples are generally cited as being from the 1950s, but did not become a movement until the late 1970s and continues to influence present-day architecture. Postmodernity in architecture is generally thought to be heralded by the return of "wit, ornament and reference" to architecture in response to the formalism of the International Style.[1]

Michael Graves' Portland Building from 1982 personifies the idea behind postmodernist thought. A reference to more traditional style is evident in the patterned column-like sections. Overt large-scale decorative elements are built into and onto the exterior walls, and contrasts between materials, colors and forms give the building a graphic sense of visual wit. 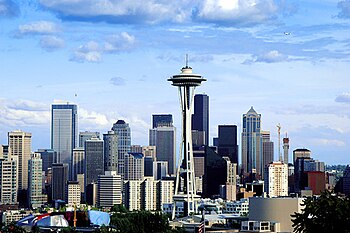 Seattle, Washington, USA skyline
Postmodern design has a more subtle but identifiable presence in some large skyscrapers. Look at any major city's central skyline and see if you can't pick out the different styles. 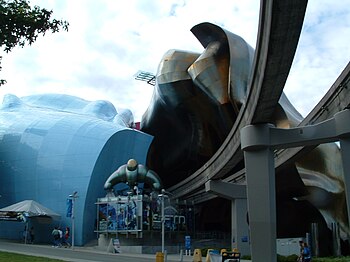 Frank Gehry, The Experience Music Project, 2000. Seattle, Washington, USA
We can see how architecture is actively evolving in the contemporary work of Frank Gehry and Zaha Hadid. Gehry's work is famous for its rolling and bent organic forms. His gestural, erratic sketches are transformed into buildings through a computer-aided design process (CAD). They have roots in postmodernism but lean towards a completely new modern style. They have as much to do with sculpture as they do with architecture. Seattle's Experience Music Project is an example of the complexity that goes into his designs. Its curves, ripples and folds roll across space and the multi-colored titanium panels adorning the exterior accentuate the effect. It's even designed for a monorail train to run through it! 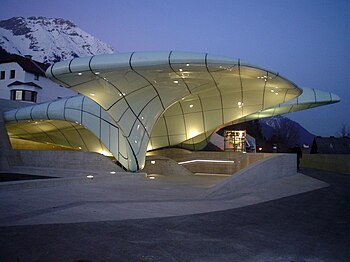 Zaha Hadid, Norpark Rail Station, 2004-2007. Innsbruck, Austria
Hadid's designs use soft and hard geometry with lots of cantilever and strong sculptural quality. In 2004, Hadid became the first female recipient of the Pritzker Architecture Prize, architecture's equivalent of the Nobel Prize. Her work defines and influences architectural style in the 21st century. For example, her design for an inclined rail station in Innsbruck, Austria is futuristic, balancing abstract forms and ornament with utility.