Architecture in China and the Far East 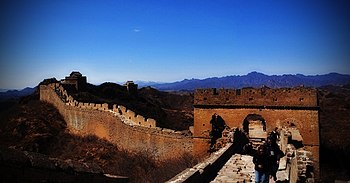 The Great Wall, China. Begun 5th century BCE, stone
Chinese architecture refers to a style of architecture that has taken shape in East Asia over many centuries. The structural principles of traditional Chinese architecture have remained largely unchanged. Chinese architectural (and aesthetic) design is based on symmetry, a general emphasis on the horizontal and site layouts that reflect a hierarchy of importance. These considerations result in formal and stylistic differences in comparison to the West, and display alternatives in design. The Chinese have used stone, brick and wood for centuries. The Great Wall, begun in the 5th century BCE, was intended to keep nomadic invaders out of Northern China. The stone wall covers 5500 miles in its entirety. The rigid material takes on a more flexible appearance as it conforms to the contours of the landscape surrounding it. Notice the use of arches in the towers. 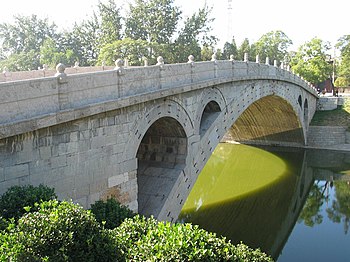 Li Chun, The Zhaozhou Bridge, Zhao County, China, 595-605 CE, stone
The Zhaozhou Bridge is an example of efficient design and flawless craftsmanship with materials. Built in 595 CE, it uses stone barrel vaults and arches to gracefully span the Xaio River. Today it is the oldest standing bridge in China. The best architectural testament to it is in a poetic inscription left on the bridge by Tang Dynasty officials seventy years after its construction and reads: 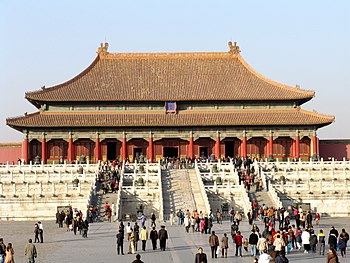 Hall of Supreme Harmony, located in the Forbidden City, Beijing, China
Though Chinese stonemason work is celebrated for its preciseness and ingenuity, the use of wood as a primary construction material is the hallmark of traditional Chinese architecture. Wooden timber, usually large trimmed logs, are used as load-bearing columns and lateral beams for framing buildings and supporting the roofs. These structural timbers are prominently displayed in finished structures. It is not known how the ancient builders raised the huge wooden columns into position. Column and roof sections were joined together in mortise and tenon joints without the use of glue or nails. One innovation developed in Chinese architecture is the cantilever an extension or overhang without exterior bracing. This was made possible by using corbel brackets or dougong triangular braces that help support heavy loads at the corners. The Chinese engineered the cantilever and bracket system to provide buildings with sweeping roof overhangs that commonly turn upwards at the corners. Cantilevered roofs appear to float above the main structure and reinforce the focus on a horizontal symmetry. The Hall of Supreme Harmony, located in the Forbidden City in Beijing, China exemplifies this design characteristic. 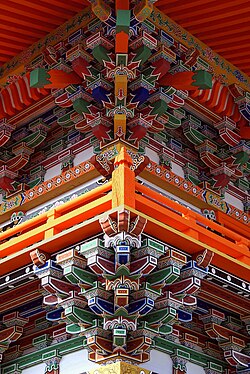 Sagami Temple, detail, 745 CE, Hyogo Prefecture, Japan
Chinese architecture influenced all of East Asian design over hundreds of years. The same elements and characteristics can be seen in traditional architecture from Japan, the Koreas and Vietnam.

Decoration is implicit in Chinese architecture. Bright colors and intricate designs dominate many traditional buildings and enhance the look of exposed timbers. The Sagami Temple in Japan (at right) uses elaborate decoration to intensify the visual effect of a complex corner structure of brackets and overhangs.