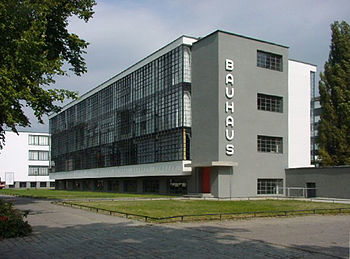 Walter Gropius, Bauhaus, 1924, Dessau, Germany
The move to modernism was introduced with the opening of the Bauhaus school in Weimar Germany. Founded in 1919 by the German architect Walter Gropius, Bauhaus (literal translation house of construction) was a teaching and learning center for modern industrial and architectural design. Though not a movement or style in itself, Bauhaus instructors and staff reflected different artistic perspectives, all of them born from the modern aesthetic. It was partly the product of a post- World War I search for new artistic definitions in Europe and Gropius's commitment to the principle of bringing all the arts together with a focus on practical, utilitarian applications. This view rejected the notion of art for art's sake, putting a premium on the knowledge of materials and their effective design. This idea shows the influence of Constructivism, a similar philosophy developed concurrently in Russia that used the arts for social purposes. Bauhaus existed for fourteen years, relocating three times, and influencing a whole generation of architects, artists, graphic and industrial designers and typographers.

In 1924, Gropius designed the Bauhaus main building in Dessau. Its modern form includes bold lines, an asymmetric balance and curtain walls of glass. Its painted in neutral tones of white and gray accented by strong primary colors on selected doors.

Gerrit Rietveld, Schroder House, 1924. Utrecht, The Netherlands
A comparative building is Dutch architect Garret Rietvelds Schroder House, also from 1924. The design is based on the reductive abstract style called de Stijl or the Style, an early modern movement that focused on balanced compositions of planar elements plus the primary colors plus black and white. The movement was made popular by the painter Piet Mondrian. As much as the focus was on materials and New Objectivity, the Bauhaus and the Schroder house help solidify the modern aesthetic first expressed by Louis Sullivan in America thirty years earlier. 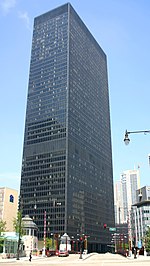 Ludwig Mies van der Rohe, IBM Plaza, 1971, Chicago, Illinois
Gropius, Rietveld and the German born architect Ludwig Mies van der Rohe were most responsible for creating a new design language for the modern age. Van der Rohe later moved to the United States and was a force in creating sleek steel framed skyscrapers with metal and glass skins. See his IBM Plaza building at right.
File:Falling Water 01.jpg
Frank Lloyd Wright, Falling Water, 1937. Bear Run, Pennsylvania, USA
Frank Lloyd Wright is considered one of the 20th century's greatest architects. He was a protégé to Sullivan and extended these new design ideas to architectural forms all his own. Wright designed buildings, churches, homes and schools, but is best known for his design of Falling Water, a home in the Pennsylvania countryside for Chicago department store owner Edgar Kaufman. His design innovations include unified open floor plans, a balance of traditional and modern materials and the use of cantilevered forms that extends horizontal balance. 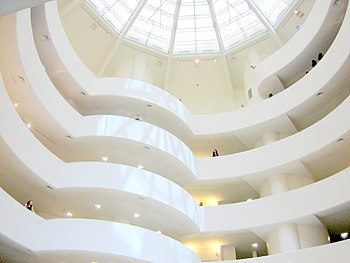 Frank Lloyd Wright, Solomon R. Guggenheim Museum, interior, 1959. New York City
The Guggenheim Museum in New York City is an example of Wrights concern with organic forms and utilization of space. The main element in the design is a spiral form rising from the middle of the cantilevered main structure. Paintings are exhibited on its curved walls. Visitors take the elevator to the top floor and view the works as they travel down the gently sloped hallway. This spiral surrounds a large atrium in the middle of the building and a domed skylight at the top.

Philip Johnson, Glass House, 1947-49. New Caanan, Connecticut, USA
The American architect Philip Johnson took the modern aesthetic to an extreme with his Glass House in New Canaan, Connecticut. Completed in 1949, its severe design sits comfortably in the rural landscape surrounding it. Steel vertical supports echo nearby tree trunks and large glass panels act as both walls and windows. Like Meis van der Rohe, Johnson was a leader in developing and refining an architecture characterized by rectilinear forms, little or no surface decoration and plenty of glass. By the mid 20th century most major cities in the world were building skyscrapers designed in the International Style.

Not all architects shared this enthusiasm for the modern style. Antoni Gaudí realized his own vision in design that gave organic shapes to his structures. The exterior of Casa Batlló (1905, below left) in Barcelona shows a strong influence from the decorative Art Nouveau style with its undulating forms and strong ornamentation.

Gaudí's greatest architectural effort is La Sagrada Familia basilica in Barcelona. Started in 1884 and unfinished to this day, its massive and complex facades, extensive stained glass and multiple towers are bridges across three centuries of architectural design.