The basic methods in building design and construction have been used for thousands of years. Stacking stones, laying brick or lashing wood together in one form or another are still used today in all parts of the world. But over the centuries, innovations in methods and materials have given new expression to architecture and the human footprint on the landscape. We can look to historical examples for clues that give context to different style periods.

In western culture, one of the earliest settlements with permanent structures was discovered at Çatalhöyük in Turkey. The rich soil that surrounds the settlement indicates the inhabitants relied in part on farming. Dated to about 7500 BCE, the dwellings are constructed from dried mud and brick and show wooden support beams spanning the ceilings. The design of the settlement incorporates a cell-like structure of small buildings either sharing common walls or separated by a few feet. The roofs are flat and were used as pathways between buildings. 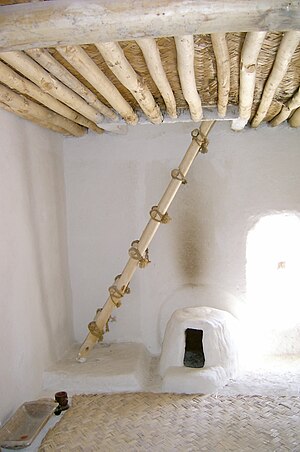 A significant advance came with the development of the post and lintel system. With this, a system of posts either stone or wood are placed at intervals and spanned by beams at the tops. The load is distributed down the posts to allow for areas of open space between them. Its earliest use is seen at Stonehenge (below, left), a prehistoric monument in southern England dating to about 3000 BCE. 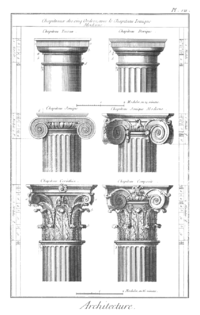 Greek and Roman capitals. Top row: Tuscan, Doric. Middle Row: Ionic. Bottom Row: Corinthian and a composite Ionic Corinthian.
A colonnade continues the post and lintel method as a series of columns and beams enveloping larger areas of space. Colonnades can be free standing or part of a larger structure. Common in Egyptian, Greek and Roman architectural design, their use creates visual rhythm and implies a sense of grandeur. Over time, columns became categorized by the capital style at their tops. The smooth and unadorned Tuscan and fluted Doric columns give way to more elaborate styles: the scrolled Ionian and the high relief Corinthian. The Parthenon, a Greek temple to the mythic goddess Athena, was built in the 5th century BCE in Athens and is part of a larger community of structures in the Acropolis. All are considered pinnacles of classic Greek architecture. Ionic colonnades march across all sides of the Parthenon, the outer boundary of a very ordered interior floor plan. 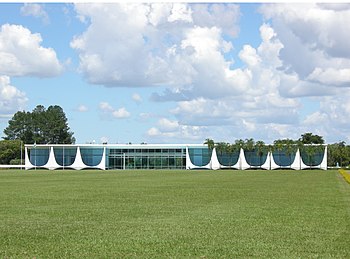 Oscar Niemeyer, Palácio da Alvorada, Brazilia, Brazil. 1957-58
The colonnade is part of our contemporary surroundings too. Parks and other public spaces use them to the same effect: providing visual and material stability in spanning areas of open space. 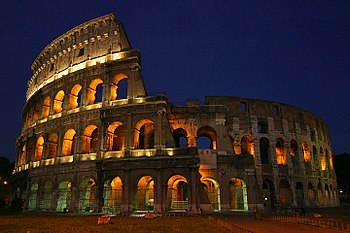 The Colosseum, Rome, Italy, 1st century CE
The development of the arch gave architecture new alternatives to post and lintel construction. Arches appeared as early as the 2nd millennium BCE in Mesopotamian brick architecture. They supply strength and stability to walls without massive posts and beams because their construction minimizes the shear load imposed on them. This meant walls could go higher without compromising their stability and at the same time create larger areas of open space between arches. In addition, the arch gave buildings a more organic, expressive visual element. The Colosseum in Rome (at right), built in the first century CE, uses repeated arches to define an imposing but decidedly airy structure. The fact that its still standing today is testament to the inherent strength of the arch. 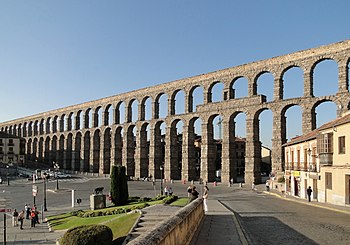 Roman aqueduct, 1st century CE
Roman aqueducts are another example of how effectively the arch was used. Tall and graceful, the arches support themselves in a colonnade and were used to transport a network of water channels throughout ancient Rome. From the arch came two more important developments: extending an arch in a linear direction formed a vault, encapsulating tall, narrow spaces with inverted U shaped ceilings. The compressive force of the vault required thick walls on each side to keep it from collapsing. Because of this many vaults were situated underground—essentially tunnels—connecting areas of a larger building or providing covered transport of people, goods and materials throughout the city. 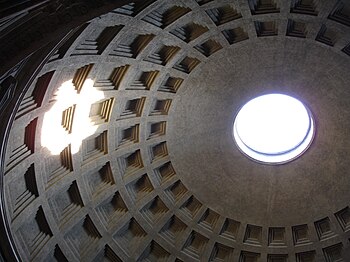 Dome of the Pantheon with oculus, Rome, Italy, 126 CE
An arch rotated on its vertical axis creates a dome, with its curving organic scoop of space reserved for the tops of the most important buildings. The Pantheon in Rome sports a dome with an oculus a round or elliptical opening at the top, that is the massive buildings only light source.

These elements combined to revolutionize architectural design throughout Europe and the Middle East in the form of bigger and stronger churches, mosques and even sectarian government buildings. 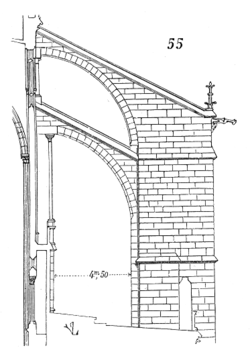 Diagram of a flying buttress from St. Denis basilica, Paris
Styles changed with technology. Romanesque architecture was popular for nearly three hundred years (800-1100 CE). The style is characterized by barrel or groin vault ceilings, thick walls with low exterior buttresses and squared off towers. Buildings reached a point where they struggled to support their own weight. The architectural solution to the problem was a flying buttress, an exterior load-bearing column connected to the main structure by a segmented arch or flyer. 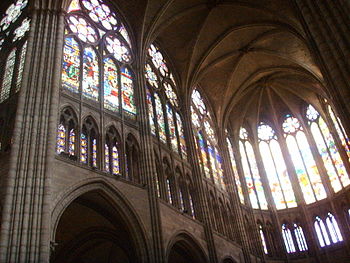 Church of St. Denis, France. 7th-12th centuries CE
Flying buttresses became a kind of exoskeleton that transferred the heavy weight of Romanesque stone roofs through their arches and into the ground, away from the building. They became catalysts for the Gothic style based on higher, thinner walls, pointed arches, ribbed vaults and spired towers. Also, the thinner walls of the Gothic style allowed for more stained glass windows and interior illumination.

St. Denis basilica in France (at right) is one of the first Gothic style churches, known for its high vaulted ceilings and extensive use of stained glass windows. The architecture of the church became a symbol of spirituality itself: soaring heights, magnificently embellished interiors and exteriors, elaborate lighting and sheer grandeur on a massive scale. 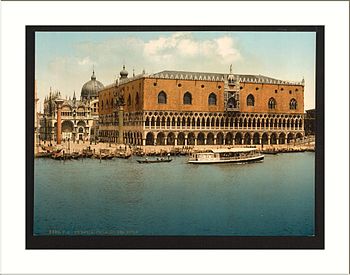 The Doge's Palace, 1309 CE, Venice, Italy
The Doge's Palace in Venice, Italy (at right) housed the political aristocracy of the Republic of Venice for a thousand years. Built in 1309 CE, its rhythmic levels of columns and pointed arches, divided by fractals as they rise, give way to elaborate geometric patterns in the pink brick facade. The ornamental additions at the top edge reinforce the patterns below.