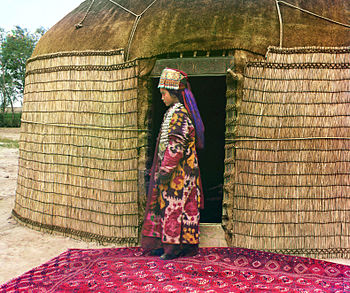 Turkman woman standing at the entry to a grass and hide-covered yurt.
Architecture is the art and science of designing structures and spaces for human use. Architectural design in itself is an art form realized through considerations of spatial design and aesthetics. Related to sculpture, architecture creates three-dimensional objects that occupy a given space and create a visual relationship with the space around them. The differences between the sculpture and architecture are in their scale and utility. Early human structures provided shelter from the elements. As hunter- gatherer societies transitioned to farming they made more permanent shelters, eventually formed communities, towns and cities. For thousands of years, architecture reflected the specific environment and materials available in any given region, including rock caves or huts of wood, soil and brick. Many were assemblages of materials like grasses, leaves and animal hides. Nomadic peoples still utilize these materials.

In simple design terms, architecture adheres to the dictum that form follows function. Architecture's function reflects different human needs. For example, warehouses take the shape of large squares or rectangles because they need only to enclose a space that protects and stores products and materials in the most efficient manner. A home is designed with other functions in mind, including cooking, resting, cleaning and entertaining. So the interior design of a home includes specialized areas for these different functions. A church or school design would have their own set of spatial requirements because they provide for large groups of people at once.

Architecture solves problems concerning the use of space, interior design and the landscape that surrounds it. The limitations imposed on architecture by the laws of physics are solved to a large extent by engineering. The greatest limitations on design are the physical loads exerted by a structure's weight. Compression loads refer to vertical weight and shear loads travel at an angle or horizontally. Buildings need stable foundations and framing systems that support the spanning of open space.