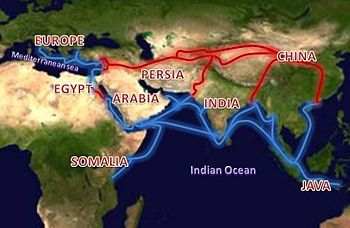 Silk Road map
As overland and marine trade routes expanded between Eastern and Western civilizations so did the influence of cultural styles in architecture, religion and commerce. The most important of these passages was the Silk Road, a system of routes that developed over hundreds of years across the European and Asian continents. Along this route are buildings that show cross-cultural influences in their design. One in particular is the Hazrat Mian Mir Tomb in Lahore, Pakistan. Completed around 1635 CE, the structure shows characteristics of Chinese design in the cantilevered roof, terraced dome and sectioned facades. Islamic features include tripartite arches and geometric decorative tiles.

The Dome of the Rock in Jerusalem (below left) offers different cultural influences manifest in one building: a classic Greek colonnade at the main entrance, the gold dome and central turret supporting it, western style arches and colorful Islamic surface embellishment. Below right is an image showing a detail of the exterior wall.

The Louvre Palace in Paris, once the official royal residence and now one of the worlds biggest museums, had its beginnings in the 12th century but didn't achieve its present form until recently. The building's style is French Renaissance marked by a formal symmetry, horizontal stability and restrained ornamentation. The Louvre executive board chose architect I. M. Pei's glass pyramid design as the defining element for the new main entry in 1989. The choice was a great success: the pyramid further defines the public space above ground and gives natural light and a sense of openness to the underground lobby beneath it.

Napoleon Courtyard of the Palais du Louvre, sections of which date back to the 16th century, and its pyramid, designed by I. M. Pei and built in 1989