It’s going to be a little while before we jump straight into Excel. First up we’re going to have a look at the general layout, and how we perform some simple actions.

The following is a screenshot of a typical Excel worksheet: 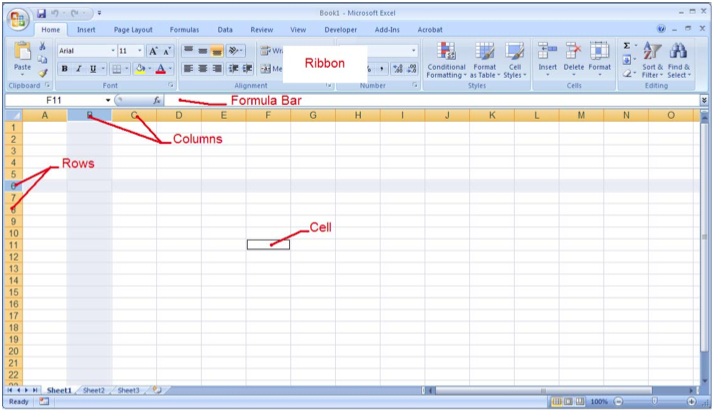 As you can see the bulk of the screen is taken up by a grid, with a row of letters along the top and a row of numbers down the side. Each square in this grid is called a cell. Cells are containers in which we can put text, numbers and formulae. We use the row and column headings to refer to the cell. In our example above we can see cell F11 is highlighted.

Above the grid is the formula bar where we can enter and edit the contents of a cell, and the standard office ribbon.

A row is a set of cells in the horizontal direction. Each row is numbered where the top-most row is numbered as 1. To highlight an entire row, we click on the row number, for example 3.

A column is a set of cells in the vertical direction. Each column is labeled with letters. After column Z, the columns are labeled with AA, AB, AC, etc. You can change the width of a column by moving your mouse over the column line and drag it to your desired width. To highlight a column, we click on the column label, for example B.

A cell is a single box that is the intersection of a column and row. Each cell is named according to its column label and row number, called a cell reference. For example, the highlighted cell shown below is named cell B3. To highlight a cell, we click in the cell, for example in cell B3. Note the name box located at the top left corner of the worksheet which displays the cell reference of the active cell: