The element of shape 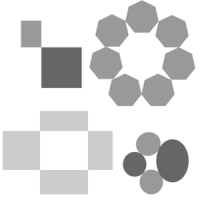 Oliver Harrison, Abstract shapes
A shape is defined as an enclosed area in two dimensions. By definition shapes are always implied and flat in nature. They can be created in many ways, the simplest by enclosing an area with an outline. They can also be made by surrounding an area with other shapes or the placement of different textures next to each other – for instance, the shape of an island surrounded by water. Because they are more complex than lines, shapes do much of the heavy lifting in arranging compositions.

Referring back to Velazquez’s ‘Las Meninas’, it is fundamentally an arrangement of shapes; organic and hard-edged, light, dark and mid-toned, that solidifies the composition within the larger shape of the canvas. Looking at it this way, we can view any work of art, whether two- or three-dimensional, realistic, abstract or non-objective, in terms of shapes alone.

Shapes animate figure-ground relationships. We visually determine positive shapes (the figure) and negative shapes (the ground). One way to understand this is to open your hand and spread your fingers apart. Your hand is the positive shape, and the space around it becomes the negative shape. You can also see this in the example of abstract shapes, but identifying positive and negative shapes can get tricky in a more complex composition. For instance, the four rectangles on the left have edges that touch each other, thus creating a solid white shape in the center. Sometimes shapes don't actually connect yet still give us an implied shape in the center. Which would you say are other positive shapes in the example of abstrat shapes? Remember that a positive shape is one that is distinguished from the background. In Las Meninas the figures become the positive shapes because they are lit dramatically and hold our attention against the dark background. What about the dark figure standing in the doorway? Here the dark shape becomes the positive one, surrounded by a white background. Our eyes always return to this figure as an anchor to the painting’s entire composition. In three dimensions, positive shapes are those that make up the actual work.The negative shapes are the empty spaces around, and sometimes permeating through the work itself. The Laocoön Group is a good example of this. A modern work that uses shapes to a dramatic effect is Alberto Giacometti’s Reclining Woman Who Dreams from 1929. In an abstract style the artist weaves positive and negative shapes together, the result is a dreamy, floating sensation radiating from the sculpture. 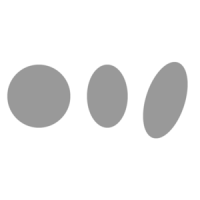 Oliver Harrison, Implied planes on a two-dimensional surface
A plane is defined as any surface area in space. In two-dimensional art, the picture plane is the flat surface an image is created upon; a piece of paper, stretched canvas, wood panel, etc. A shape’s orientation within the picture plane creates a visually implied plane, inferring direction and depth in relation to the viewer. The graphic at right shows three examples. Traditionally the picture plane has been likened to a window the viewer looks through to a scene beyond, the artist constructing a believable image showing implied depth and planar relationships.Landscape with the Fall of Icarus, painted by Pieter Breughel the Elder in 1558 presents us with the tragic ending to the Greek myth involving Icarus, son of Daedalus, who, trying to escape from the island of Crete with wings of wax, flies too close to the sun and falls to earth. Breughel shows us an idyllic landscape with farmers tilling their fields, each terraced row a different plane of earth, and shepherds tending their flocks of sheep in the foreground. He depicts the livestock in positions that infer they are moving in different directions in relation to the ‘window’ of the picture plane. We look further to see a gradual recession to the sea and a middle ground dominated by a ship under sail. The curves of the billowing sails imply two or three different planes. The background of the painting shows the illusion of deep space, the massive cliffs now small in relation to the foreground, 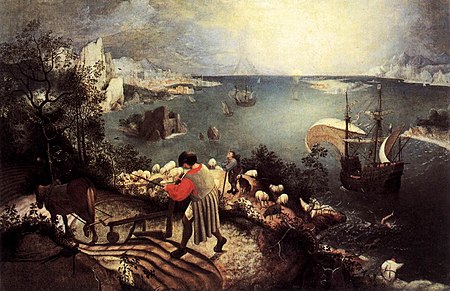 Landscape with the Fall of Icarus, Peter Breughel the Elder, 1558, Musee des Beaux-arts, Brussels
and the distant ship near the center as smaller and lighter in tone. In the grandeur of the scene Icarus falls into the sea unnoticed just off shore to the lower right, only his legs still above water. The artist’s use of planar description is related to the idea of space and how it’s depicted in two dimensions. We will look at the element of space just ahead.