The element of mass 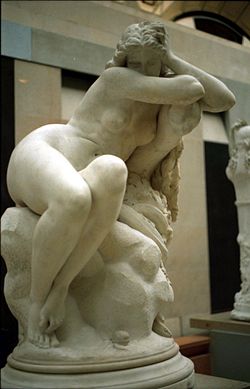 Eugene Delaplanche, Eve after the Fall, 1869. Marble, Musee d’Orsay, Paris
Mass, or form, refers to a shape or three-dimensional volume that has or gives the illusion of having weight, density or bulk. Notice the distinction between two and three- dimensional objects: a shape is by definition flat, but takes on the illusion of mass through shading with the elements of value or color. In three dimensions a mass is an actual object that takes up space. Eugene Delaplanche’s sculpture Eve After the Fall from 1869 epitomizes the characteristics of three-dimensional mass. Carved from stone with exaggerated physicality to appear bigger than life, the work stands heavily against the space around it. Delaplanche balances the massive sculpture by his treatment of the subject matter. Eve sits, her body turned on two diagonal planes, one rising, the other descending, her right hip being the meeting point of the two. She rests her head in her hand as she agonizes over the consequences of what she’s just done, the forbidden apple at her feet as the serpent slinks away to her left.

Male figure, Cameroon, c. 19th century, Artist unknown, Collection: Ethnological Museum, Berlin-Dahlem
Although actual mass and form are physical attributes to any three-dimensional work of art, they are manifested differently depending on the culture they are produced in. For example, traditional western European culture is known for its realistic styles, represented by Delaplanche’s Eve after the Fall. In contrast, look at the figurative sculpture from the Cameroon culture in Africa at right to see how stylistic changes make a difference in the form. The sculpture is carved from wood, generally more available to the artist in sub-Saharan Africa than is marble. Moreover, the Cameroon figure stands upright and frontal to the viewer, and is carved without the amount of descriptive detail seen in Delaplanche’s work, yet the unknown African artist still gives the figure an astonishing amount of dramatic character that energizes the space around it.

Form and space, whether actual or implied, are makers for how we perceive reality. How objects relate to each other and the space around them provide the evidence for the visual order of our world. The artist's creative manipulation of these elements determines the stylistic qualities in a work of art that, in the end, always contains the subjective fingerprint of the artist's idea of the real.