The element of the line 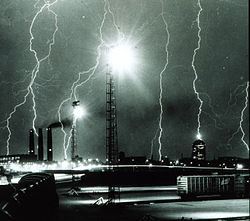 Lightning storm over Boston, NOAA
Essentially, when you put two or more points together you create a line. A line can be lyrically defined as a point in motion. There are many different types of lines, all characterized by their length being greater than their width. Lines can be static or dynamic depending on how the artist chooses to use them. They help determine the motion, direction and energy in a work of art. We see line all around us in our daily lives; telephone wires, tree branches, jet contrails and winding roads are just a few examples. Look at the photograph of lightning over Boston to see how line is part of natural and constructed environments.In this digital image of a lightning storm we can see many different lines. Certainly the jagged, meandering lines of the lightning itself dominate the image, followed by the straight lines of the light standards, the pillars holding up the overpass on the right and the guard rails attached to its side.There are more subtle lines too, like the gently arced line at the top of the image and the shadows cast by the poles and the standing figure in the middle. 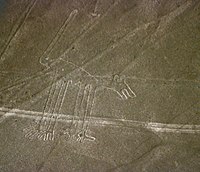 Lines and geoglyphs of Nasca and Pampas de Jumana
Lines are even implied by falling water droplets in the foreground.

The Nazca lines in the arid coastal plains of Peru date to nearly 500 BCE were scratched into the rocky soil, depicting animals on an incredible scale, so large that they are best viewed from the air. Let’s look at how the different kinds of line are made. 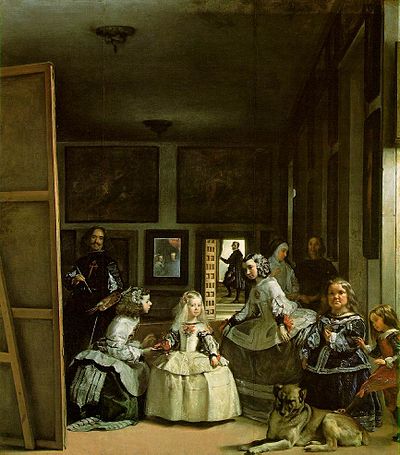 Diego Velazquez, Las Meninas, 1656, oil on canvas, 125.2” x 108.7". Prado, Madrid
Diego Velazquez’s Las Meninas from 1656, ostensibly a portrait of the Infanta Margarita, the daughter of King Philip IV and Queen Mariana of Spain, offers a sumptuous amount of artistic genius; its sheer size (almost ten feet square), painterly style of naturalism, lighting effects and the enigmatic figures placed throughout the canvas –including the artist himself – is one of the great paintings in western art history. Let’s examine it to uncover how Velazquez uses basic elements and principles of art to achieve such a masterpiece. 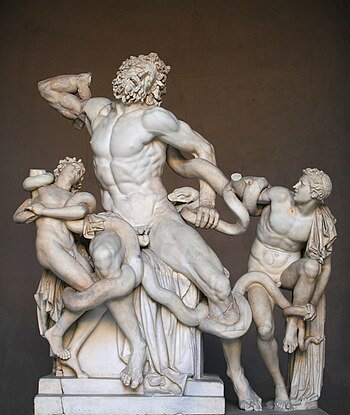 Actual lines are those that are physically present. The edge of the wooden stretcher bar at the left of Las Meninas is an actual line, as are the picture frames in the background, and the linear decorative elements on some of the figures' dresses. How many other actual lines can you find in the painting?

Implied lines are those created by visually connecting two or more areas together. The space between the Infanta Margarita – the blonde central figure in the composition – and the ‘meninas’, or maids of honor, to the left and right of her, are implied lines. Both set up a diagonal relationship that implies movement. By visually connecting the space between the heads of all the figures in the painting we have a sense of jagged motion that keeps the lower part of the composition in motion, balanced against the darker, more static upper areas of the painting. Implied lines can also be created when two areas of different colors or tones come together. Can you identify more implied lines in the painting? Where? Implied lines are found in three-dimensional artworks too. In the sculpture Laocoön Group, Laocoön, a figure from Greek and Roman mythology, is, along with his sons, being strangled by sea snakes sent by the goddess Athena as wrath against his warnings to the Trojans not to accept the Trojan horse. The sculpture sets implied lines in motion as the figures writhe in agony against the snakes.

File:ART STRAIGHT LINES.png
Oliver Harrison, Straight or classic lines
Straight or classic lines provide structure to a composition. They can be oriented to the horizontal, vertical or diagonal axis of a surface. Straight lines are by nature visually stable, while still giving direction to a composition. In the Las Meninas, you can see them in the canvas supports on the left, the wall supports and doorways on the right, and in the background in matrices on the wall spaces between the framed pictures. Moreover, the small horizontal lines created in the stair edges in the background help anchor the entire visual design of the painting. 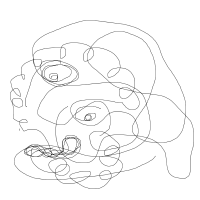 Oliver Harrison, Expressive or organic lines
Expressive or organic lines are curved, adding an organic, more dynamic character to a work of art. Expressive lines are often rounded and follow undetermined paths. In Las Meninas you can see them in the aprons on the girls’ dresses and in the dog’s folded hind leg and coat pattern. Look again at the Laocoön to see expressive lines in the figures’ flailing limbs and the sinuous form of the snakes. Indeed, the sculpture seems to be made up of nothing but expressive lines, shapes and forms.

There are other kinds of line that encompass the characteristics of those above yet, taken together, help create additional artistic elements and richer, more varied compositions. Refer to the images and examples below to become familiar with these types of line: 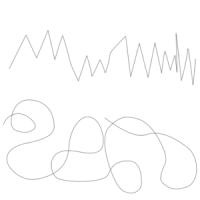 Oliver Harrison, Comparison: Line quality
Line quality is that sense of character embedded in the way a line presents itself. Certain lines have qualities that distinguish them from others. Hard-edged, jagged lines have a staccato visual movement while organic, flowing lines create a more comfortable feeling. Meandering lines can be either geometric or expressive, and you can see in the examples how their indeterminate paths animate a surface to different degrees.

Although line as a visual element generally plays a supporting role in visual art, there are wonderful examples in which line carries a strong cultural significance as the primary subject matter.

Calligraphic lines use quickness and gesture, more akin to paint strokes, to imbue an artwork with a fluid, lyrical character. This unique line quality is exemplified in the work of Chinese poet and artist Dong Qichang’s Du Fu’s Poem, dating from the Ming dynasty (1555-1637).

Consider this more geometric example from the Koran, created in the Arabic calligraphic style. 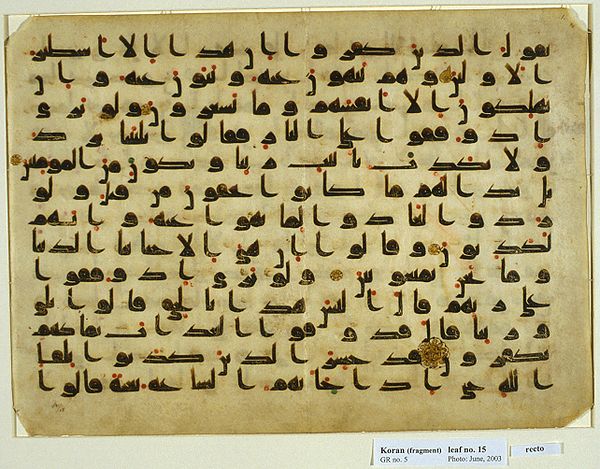 Verses 19-31 of the 6th chapter of the Qur'an entitled Surat al- An'am (The Cattle), 9th century, US Library of Congress

Both these examples show how artists use line as both a form of writing and a visual art form. American artist Mark Tobey (1890-1976) was influenced by Oriental calligraphy, adapting its form to the act of pure painting within a modern abstract style described as "white writing."