The element of the point 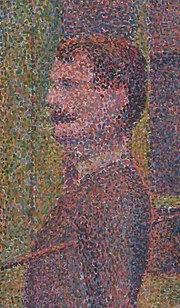 Georges Seurat, La Parade de Cirque,1887-89
A point is the visual element upon which all others are based. It can be defined as a singularity in space or, in geometric terms, the area where two coordinates meet. When an artist marks a simple point on a surface, (also referred to as the ground), they immediately create a figure-ground relationship. That is, they divide the work between its surface and anything added to it. Our eyes differentiate between the two, and their arrangement has everything to do with how we see a final composition. The point itself can be used as a way to create forms. For example, Pointillism is a style of painting made famous by the French artist Georges Seurat in the late nineteenth century. 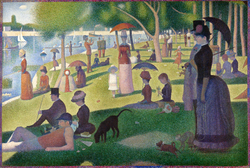 Georges Seurat, A Sunday on La Grande Jatte, 1884-86
He and others in the Pointillist group created paintings by juxtaposing points, or dots, of color which optically mix to form lines, shapes and forms within a composition. Look at a detail from Seurat’s La Parade de Cirque to see how this works. His large canvas A Sunday on La Grande Jatte, 207.5 x 308.1 cm (81 3/4 x 121 1/4 in), is a testament to the pointillist style and aesthetic. Its creation was a painstaking process but one that generated new ways of thinking about color and form.