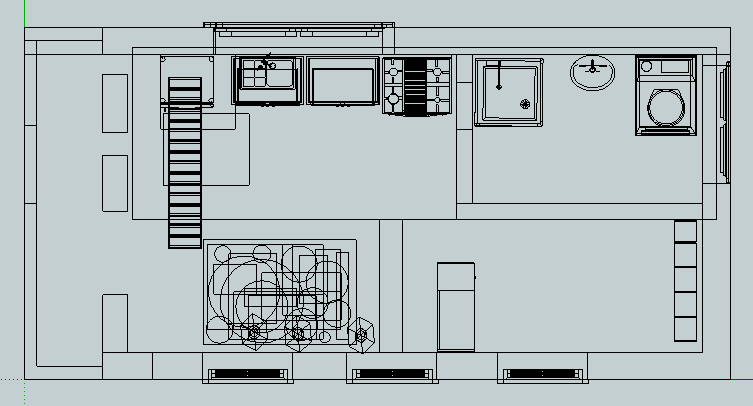 A floorplan of a potential home, exported from Google Sketchup.

For the course of this project, we've been working with this concept of designing a house for the human body rather than for the object. This is a more difficult mindset shift than I thought it would be, so I'd like to take this opportunity to throw out some ideas and concepts to bounce around.

One of the ways we went about doing this in the early design stages was to break down the home into needs instead of rooms. We listed needs like eating/ food preparation, sleeping, socializing, working, hygiene, and broke down spaces for these into social, private and intimate space. This way, we came up with the division of space. (I'll post a photo of the floorplan soon:)) This is a fairly non-traditional breakdown- you'll notice that there is no defined 'eating space,' (kitchen table location or dining room) as we found that many people prefer to eat in the living room or in the place of socialization. We also observed that the living room has become a dead room in many parties, and the kitchen is more often a place of gathering. The open space that includes the food prep area and the social space will be the best way to activate the spaces, and meet both needs.

Addressing aspects of the house based on human needs was also done by looking at patterns in how we meet our needs currently. For example, kitchens- designed with deep cupboards, a large fridge and freezer and very little space designated for fresh fruits and vegetables are a shaping factor in our diets. It's very easy now to purchase a lot of packaged/ preserved items that have very little nutritional value and require low involvment on the part of the user. It's also clear that the advent of supermarkets, shopping carts and especially the fridge was a catalyst for our highly wasteful food consumption.

If instead a kitchen were designed with more space designated for fresh fruits and veggies, shallower cupboards, clearly defined systems of waste management and were pleasing to work in, then the user would be more likely to take the time to cook, and would enjoy that process.

There are numerous other case studies/ research that we're developing on the specifics of redesigning space for the human body. I'm looking at alternatives to chairs/ seating, multi-purposing rooms and building more varied movement/ tasks into our lifestyles.

... Interaction should facilitate or even persuade users to learn what underlies the task they are doing. The same is true in situations where interruptions are commonplace and where in the meanwhile mastery of what is underlying a task or domain is desired, or when operations come with a cost and direct solutions without deviations are the aim. In designing our interfaces we ... must design in such a manner that the way users (should) think is optimally supported."

In other words: we need to design for the optimal usage of the house. Good defaults are very important here (In my opinion, the strength of Apple software is the choice of good defaults (and sometimes not giving users the ability to chose))

"We concluded that relieving a user’s memory and making interactions assisted by externalizing information does not have beneficial effects. It makes users count on the interface and gives them (unrightfully so) the feeling that the task and thinking-work is partly done for them, which seduces users in more shallow cognitive behavior."

In other words: It is important to help the user build a good mental representation of how things are working. Preferably this would be similar to the way things actually work, but it can also be an arbitrary metaphore for what is happening.

"Not every task is important enough to teach users the mechanisms that support it. Many interfaces benefit from a level of abstraction or decoupling from the underlying processes. The spirit of this research is to point out that the effort to dumb down can go too far."

Aka: Teaching people how everything works is impossible. Abstraction has it's place, we'll have to find a balance.

Someone's comment: "When a person is learning how to use 3D modeling software -- like AutoCAD or Revit or Inventor -- they may actually be learning (at least) two things: (1) How to think and draw in 3D space, and (2) How to make this happen in software. I'm not sure what the pedagogical solution to this challenge is, but I suspect that people who learn drafting before learning the software would more quickly learn the software and have greater facility with it over the long term. Just a guess, though. "

One of the other things we've discussed is how to design a house so that it encourages better modes of motion for the human body. Our research has taken us into case studies like the chair, which is a problematic design at best. What if a house had no chairs? What kinds of alternatives would we consider?

We like the idea of large pillows to sit on- because they are ergonomically universal and encourage good posture.

We're also looking at elements like ladders and spiral staircases. It is important to balance issues of access with encouraging users to be physically active. How can physical activity be built into home design?

There was also the idea that we could bring the outdoors inside and vice-versa, to break down increasing barriers we have to interacting with the outdoors. In many Canadian climates, the standard routine is to get up, get in a car, go to work and back. In Calgary I remember days when we wouldn't ever see the sun, because we would wake up and get to school before it was up, and we would get home after it set. Less engagement with the outdoors leads to a significantly less active lifestyle, so we would like to take our design in a different direction.