Community Council/Meetings/Third/Motion to adjourn the meeting

Pre meeting discussion on background issues prior to drafting motions

As Chair, I feel that it is unprofessional to run meetings beyond their advertised schedule. I realise that their are unresolved motions on the table and therefore need your guidance and mandate to continue the meeting beyond its scheduled time or whether to consider adjournment.

The Lazy consensus poll question is:

Are there any structural changes you believe would help make it easier to participate? SteveFoerster 14:23, 10 May 2010 (UTC)

I agree with your sentiments -- but a minor correction, each motion approved was approved by a majority vote and there is a registered attendance just short of 90% of Council. So it is incorrect to say that a minority has voted. Moreover, our Governance policy presumes assent which means if you don't cast your vote, you agree with the majority. I've just checked the voting register and noted that you have not voted on every motion and we respect the rights of any Council member to abstain or not vote. Would be great if you would indicate your abstentions in cases where you felt you could vote on principle :-) -- --Wayne Mackintosh 05:11, 10 May 2010 (UTC)

Yip sub-goals and timeline are useful -- speaking from the Chair, I would suggest resolution of the current motions on the agenda. Realistically, I don't have the time to chair a meeting at this level beyond the close of business this week. Ideally we can wrap up the resolutions before then :-). We have a number of important workgroups to be constituted and every member of Council is invited (and hopefully will participate.) --Wayne Mackintosh 22:54, 10 May 2010 (UTC)

As Nominated Member, I feel that it is professional to honour the discussion and realities that push meetings beyond their advertised schedule. ;) Peter Rawsthorne 14:52, 12 May 2010 (UTC)

I would like to entertain a motion to adjourn the Third Meeting of Council by the close of business, Friday, 14 May 2010 (Based on the local time in Apia, Samoa). (See: Local time conversion)

I hereby move a motion for adjournment of this meeting at close of business hours on 14th May 2010 (local time in Apia, Samoa), with an understanding that we meet again in or before September 2010. Savithri Singh 07:55, 13 May 2010 (UTC)

I am keen to bring this meeting to a close. Just one item to which I'd like to draw attention: (fast track motion on) Guidelines for ancillary web services - Kim Tucker 08:38, 14 May 2010 (UTC) 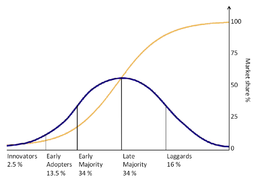 I am also keen to bring this meeting to a close. My one concern is I believe WE is not assessing its current adoption life-cycle well. I believe the council perceives the WE contributor profile as early majority where WE still very much needs the innovator / early adopter. I am making reference to the diffusion of innovations theory. By having way too much bureaucracy and the barriers to contribution that seem to be forming by creating policies like 3rd party media, ancillary web services, privacy policy, etc... WE is going to "scare" away (evidence is showing it is doing so now) the innovator / early adopter contributor type. For WE growth, people need to be able to create, reuse and add OER content with reckless abandon. And they need a platform that does not restrain in any way... even if it does "break" the rules. WE could still claim Fair-Use if a copyright challenge (if ever) comes. By putting up barriers to contribution WE will never achieve the required 15% to cross over into the majority. -- Peter Rawsthorne 18:11, 14 May 2010 (UTC)

A majority of the Council has voted to approve this motion. This motion has been approved and the meeting is adjourned. (For the record --- additional votes are always welcome) --Wayne Mackintosh 04:10, 15 May 2010 (UTC)