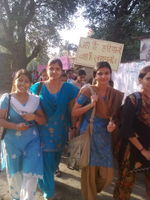 The 1st program of the day was “Prabhat Pheri”. Prabhat pheri was one of the most important parts of our WWC Educational camp. This programme was continued for 4 days along with other programmes. After the prayer all the students were divided into various groups in two lines with effective slogans in their hands. All this slogans were written on cardboard in capital letters which convey the messages on several issues such as Dowry system, harassment of the Bride, Child marriage, caste system, Damage of environment, Women education and prevailing of narcotics, liquor and smoking, etc in the society. Everyday, it was rigorous one hour demonstration on the hot burning issues of the society.

The demonstrators took out processions in each nook and corner of the village with the banners in their hands.

This slogan means that smoking is injurious for health. If smoking is not stopped at correct time then person is close to his death.

It means that dowry system should be stopped from our life for better future of girls.

It simply means that girl’s education is very necessary for better future of their coming generation. The banners were written in Hindi so that it could be understood by the local peoples. There were also patriotic songs sung by us such as –

In the early morning of 7 to 8 a. m. all the people are at home and came out of the house to listen to the demonstrators and understood the message.

We visited each street of the village so that the message of the WWC could reach to everybody. The enthusiastic young students of ours inspired many of the youth and children that they too joined with us in the Prabhat Pheri. Along this slogan there are many slogans which are included in our programme. All the students were shouting with slogans and present a message to whole villagers. No matter of roads was rare, but we were trying to do our best. We had taken round of whole village. The villages also responded well at our try. They came to here us by leaving all their household work and this created a great enthusiasm in us. Looking to their response we got a new energy to raise slogan. Daily we go in a different lane and go for a round of the whole village. The rally stops at our next destination i.e. the big ground at the end of the village when we move ahead with other programs.