The pages in this project refer to the New Zealand Managed learning Environment work to integrate our three supported learning management systems (or learning platforms, being Moodle, Ultranet and KnowledgeNET) with a national e-portfolio service (MyPortfolio, based on Mahara).

The first section revolves around the Stakeholder Consultation Report (File:LMS-ePortfolio Consultation Document - VERSION 1.0.pdf). They are intended for community editing to provide us with feedback and additional material in each of the areas identified. If you feel comfortable to do so then please add your own additions to these pages, although we request that you do not delete the contributions of others. If you prefer you can add a comment or discussion item to the discussion forum We value your input!

Following the consultation around the above paper this approach was adopted by the team (Ministry, school leaders and vendors). Initial scoping determined there were three phases to this integration and would be designed and built in order. They are:

Note that while each involves web services/machine-to-machine communications, most of the web service functionality will be addressed int he first phase, laying a foundation for the second and third.

The proposed design (File:Integrating LMS to MyPortfolio Design v3.pdf) for the account provisioning phase is available for consultation and feedback. As we received little (if any) feedback from the various sub-pages created for the Stakeholder Consultation, for this phase we will only post the document here and use the MLE Reference Group for feedback.

In recent years ePortfolios have begun to emerge as an important component of the technology landscape within education institutions at both school and tertiary levels. Whilst the purpose of an ePortfolio can vary considerably depending on the educational context and level, there is increasing consensus that the ePortfolio fulfils a need for a student-owned and student-centred space to manage, record and present their work, reflections and achievements that LMS systems cannot easily cater for. Within the Schools MLE Programme the LMS system is seen as a 'hub' component in the curriculum and pedagogy space. Eportfolios represent one of the key satellite systems in this space. The Ministry of Education (MOE) conducted an initial investigation into ePortfolio use in schools in 2009.1 One of the primary questions motivating that work was how best to support schools in developing their use of ePortfolios. The report recommended that there was little benefit in supporting a proliferation of ePortfolio systems, the main issue was to support one that had the potential to interoperate well as part of an MLE with other school systems. The open source ePortfolio platform originally developed in New Zealand presented itself as an obvious choice, not least because it offers an implementation of the preferred candidate for an ePortfolio interoperability standard (LEAP 2A). Since then a decision has been taken to support certain aspects of the ongoing development of Mahara as a national reference system for ePortfolios and to provide an implementation of Mahara (currently under the name of MyPortfolio) as a hosted service to schools. Under this scheme every school student in New Zealand is eligible for a MyPortfolio account which they can use throughout their school career. With these developments as a background, the main question, in the context of the MLE programme, now becomes: how can MyPortfolio and school LMS systems be best integrated with each other to operate effectively and cohesively together? This is a multi-faceted question which can be partly solved through technical interoperability but also includes social and organisational dimensions around the rules and patterns of use of these systems. The ePortfolio-LMS integration project will explore user requirements for integration of Mahara with the LMS systems and work with developers to establish an architectural model for solving the technical interoperability requirements identified.

The diagram (figure 1) below illustrates the main system components under consideration here and the current interactions both between system components and with human users. The figure represents a general schematic of the current situation typically found in schools using both an LMS system and MyPortfolio. The figure draws a distinction between those systems that are 'owned' and managed by the school (those above the dashed dividing line) and those that exist outside of institutional ownership and control. 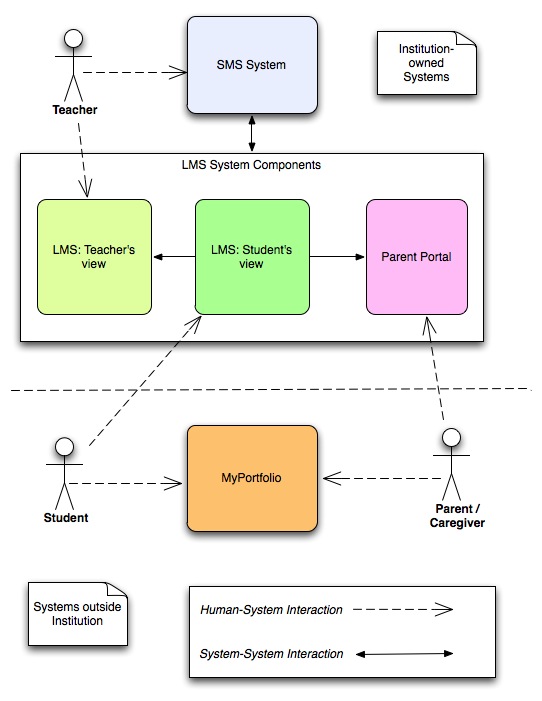 The system components and interactions are described below. Within the school-owned space the primary system of concern here is the LMS system. There are many possible ways to describe the components of an LMS, but here we depict the various role-based views that are available. Naturally the teacher has a view onto the system with various teacher-oriented tools and spaces (e.g. activity creation and management tools, course management tools, assesment tools etc). The students have a different view which is typically limited to their engagement with the courses and activities set-up by the teacher and interactions with their peers in class-based discussions and so on. Within New Zealand schools an important third component or view is the Parent Portal. In some cases this forms part of the LMS itself (e.g with Ultranet and KnowledgeNet) as depicted here, or it may be an independent piece of software. The Parent Portal provides a view onto the students work and progress for the parents or caregivers to view and integrates NZQA assessment information from the SMS system and items from the LMS system.

MyPortfolio (as an instance of the Mahara platform which is provided as an independently-hosted national service) sits outside of the school systems. The key idea is that MyPortfolio is a student-owned and managed space which allows students to organise their work according to their own categories and projects, to engage in reflective study and to create selective views for others such as parents, teachers, peers, potential employers and so on to see and/or provide feedback.

In some cases parents can currently access a view of their child's MyPortfolio space through a 'secret-url' mechanism, but in others parents are encouraged only to access information through the Parent Portal. Although not shown on the diagram for simplicity, teachers can also be provided with access to MyPortfolio views as teachers will have their own accounts on the system, which means that students can provide peers and teachers with views to their portfolio without resorting to the 'secret-url' mechanism.

What is missing from this current picture is any system-to-system interaction between the school-owned systems (particularly LMS systems) and MyPortfolio. This current lack of interoperability has been identified as a hindrance to the effective use of MyPortfolio in a schools context and provides the focus for the current work.

Goals and Drivers of the project:

The key driver for the project is to increase the value of MyPortfolio as hosted service to NZ schools by developing an interoperability solution with existing school LMS systems which meets the needs of stakeholders. The high-level goals of the project are: