WikiEducator is an online project to create an open educational resource collaboratively with educators from around the world. It is developing a free form of education that maintains a community of diverse individuals. It allows educators to create, publish, edit, as well as discuss nearly any topic that can be considered educational. WikiEducator has hundreds of different projects, is presented in more than five languages and 110 different nations worldwide[1]. The servers are based at Athabasca University in Canada, and it is funded by the Common Wealth of Learning.

Of WikiEducator's many initiatives, Learning4Content is one of its most prominent. L4C involves educators from around the world. This initiative trains others in wiki-editing skills so that they are able to share their knowledge with the most efficiency. By June 2009, more than 3000 educators were trained in 113 countries world-wide. The ever expanding involvement ensures that fresh content is effectively and efficiently added by a diverse people.

WikiEducator contains over 13,000 articles, and more than 500,000 edits. Articles are contributed by educators such as Phil Bartle (who is also a part of L4C)[2] who has this testimony:

"My name is Phil Bartle and I live in Victoria, British Columbia, in Western Canada. I spent most of my adult life in Africa and Asia as an aid worker, and the most important thing that I learned is that aid is not only usually ineffective, it is mainly a negative force, causing a decline in sustainable development, and an increase in poverty. With a few friends and colleagues of a like mind, I developed a methodology called community empowerment, which is aimed at strengthening low income communities to become more self reliant and less dependent upon handouts. I started putting training material on the Internet which was aimed at training community workers to teach them how to encourage and guide communities to become more empowered. In order to translate the material, I founded an NGO, and recruited several hundred volunteers to translate it into over thirty languages, and other volunteers to coordinate and encourage the volunteers. Then Randy and Wayne came along and introduced me to WikiEducator and its principles and aims. It is just what I needed, and I joined up, assigning all my copyrighted material under a CC-BY-SA license so that others could use it and run with it. With a few of my volunteers, I am preparing material in four languages, English, Portuguese, French and Spanish (the most common in developing countries). This is the answer."

As WikiEducator grows, the quality of the content increases with articles published by users like Phil Bartle. There are many other highly-qualified users that actively participate in WikiEducator.

L4C is just one of WikiEducator's massive amount of efforts to expand distance learning and open resource education.

By 2015, WikiEducator plans and aspires to construct a global community to which is dedicated to refining available technology for the development of free content and learning curriculum for all levels of education reaching all ages which can be accessed, modified, and adjusted for local needs without limitation.

To accomplish this we must:

Currently WikiEducator has over 13,000 users and articles, more than 24,000 files and over 540,000 edits WikiEducator is well on its way now. The number of articles has had a major increase. From March 2006 there were only 2 articles being posted a day compared to 12 posted during January of 2010. The size of an article is gaining monthly as well. Just two years ago in February 2008 the articles were 1.9 Mega Bights to now currently 6.0 Mega Bights, making the parentage rise 8% over time. 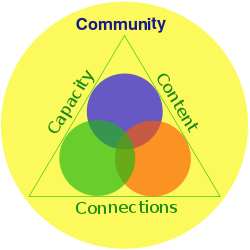 WikiEducator also focuses on new technologies, since the database is based on a technology, one of its most important characteristics is its aim to stay current and updated.

The creation and building of WikiEducator was separated into three phases, and is currently on its third phase.

Phase 1: The first phase was a matter of building a foundation, creating a domain as well as staff members and a governing type. Connections also had to be made in order to ensure that the growth was constant and the right targets were reached. The end result was a democratic government, and a WikiEducator basis with the capacity for others to add material. This phase lasted from May 2006 to December 2007.

Phase 2: The second phase was refining. WikiEducator's methods were refined and streamlined. Specific articles were now much easier to access, and those articles which needed the most review would be those which received the most attention. Phase 2 focused on methods that the accuracy and quality could be refined. This phase was focused on from January 2008 to December 2008.

Phase 3: The third phase is ongoing and is the implementation of this free educational learning resource.

Since 2006, WikiEducator has maintained a steady growth from just a small website to a massive online database. It has completed 2 of its 3 phases and is currently on the third phase. Here are some highlights: 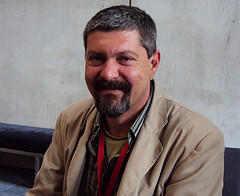 Why it is Good For Schools?

WikiEducator is worldwide and in many languages meaning schools from all around the world can be able to access it.

Why it is important?

Social software is changing how we record, access, share and use knowledge. COL believes that WikiEducator will radically expand free learning content and vastly improve access to education in countries of the Commonwealth. The advantages of WikiEducator lie in its accessibility and simplicity. Users can collaborate without consideration for travel, communicating across different time zones or dealing with differences in technology.

"We're turning the digital divide into digital dividends using free content and open networks. We hope you can help us." -WikiEducator

What you can do to help

With the amassing of so much information, you can add your own knowledge and opinion into each article. You can discuss topics of controversy, edit articles which you are knowledgeable about, and even create your own. Doing this will benefit all others that participate and even encourage new members. Expanding this vast learning resource will ensure its progress for future generations, even if it is just a tiny edit. Remember, even the smallest act can make the greatest difference!

you can find your learning ways more easily around the site. Feel free to add your thoughts and suggestions here.