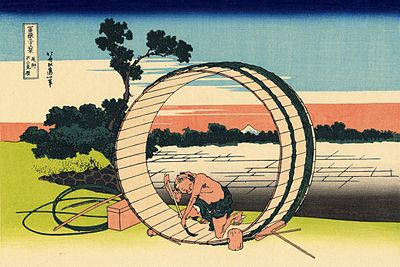 Katsushika Hokusai, Fuji Viewed from Rice Fields in Owari Province, part of the series Thirty-six Views of Mount Fuji, no. 40, 4th additional woodcut, first publication: circa 1830, this edition: circa 1930. Woodblock color print.
Ultimately, a work of art is the strongest when it expresses an overall unity in composition and form, a visual sense that all the parts fit together, that the whole is greater than its parts. This same sense of unity is projected to encompass the idea and meaning of the work too. This visual and conceptual unity is sublimated by the variety of elements and principles used to create it. We can think of this in terms of a musical orchestra and its conductor: directing many different instruments, sounds and feelings into a single comprehendible symphony of sound. This is where the objective functions of line, color, pattern, scale and all the other artistic elements and principles yield to a more subjective view of the entire work, and from that an appreciation of the aesthetics and meaning it resonates.

We can view the woodblock print, “Fuji Viewed from Rice Fields in Owari Province” part of the series, Thirty-Six Views of Mount Fuji designed by Katsushika Hokusai (shown at right) to see how unity and variety work together. Hokusai made use of nearly every element and principle in his work, including a range of values, colors, and textures in his depiction of a barrel maker set against a parched rice-field with Mount Fuji in the distance. The unity of the print is held in place by the large barrel which encloses and unifies the individual elements of the composition.