Emphasis – the area of primary visual importance – can be attained in a number of ways. We’ve just seen how it can be a function of differences in scale. Emphasis can also be obtained by isolating an area or specific subject matter through its location or color, value and texture. Main emphasis in a composition is usually supported by areas of lesser importance, a hierarchy within an artwork that’s activated and sustained at different levels.

We can clearly determine the figure in the white shirt as the main emphasis in the painting. Even though his location is left of center, a candle lantern in front of him acts as a spotlight, and his dramatic stance reinforces his relative isolation from the rest of the crowd. Moreover, the soldiers with their aimed rifles create an implied line between them selves and the figure. There is a rhythm created by all the figures’ heads – roughly all at the same level throughout the painting – that is continued in the soldiers’ legs and scabbards to the lower right. Goya counters the horizontal emphasis by including the distant church and its vertical towers in the background.

In terms of the idea, Goya’s painting gives witness to the summary execution of Spanish resistance fighters by Napoleon’s armies on the night of May 3rd, 1808. He poses the figure in the white shirt to imply a crucifixion as he faces his own death, and his compatriots surrounding him either clutch their faces in disbelief or stand stoically with him, looking their executioners in the eyes. While the carnage takes place in front of us, the church stands dark and silent in the distance. The genius of Goya is his ability to direct the narrative content by the emphasis he places in his composition. 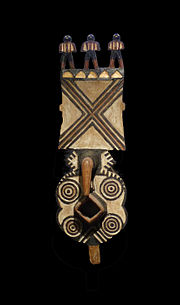 A Bwa plank mask from Burkina Faso. Musée Barrois, Bar-le-Duc, France
The emphasis in Landscape with Pheasants, a silk tapestry from 19th century China, is obtained in a couple of different ways. First, the pair of birds are woven in colored silk, setting them apart visually from the landscape they inhabit. Secondly, their placement at the top of the outcrop of land allows them to stand out against the light background, their tail feathers mimicked by the nearby leaves. The convoluted treatment of the rocky outcrop keeps it in competition with the pheasants as a focal point, but in the end their color wins out.

A final example on emphasis covers both design features and the idea behind the art. Many world cultures include artworks in ceremony and ritual. African Bwa masks (see example at right) are large, graphically painted in black and white and usually attached to fiber costumes that cover the head. They depict mythic characters and animals or are abstract, and have a stylized face with a tall, rectangular wooden plank attached to the top.[1] In any manifestation, the mask and the dance for which they are worn are inseparable. They become part of a community outpouring of cultural expression and emotion.