Repetition is the use of two or more like elements or forms within a composition. The systematic arrangement of repeated shapes or forms creates pattern.

Patterns create rhythm, the lyric or syncopated visual effect that helps carry the viewer, and the artist’s idea, throughout the work. A simple but stunning visual pattern, created in this photograph of an orchard by Jim Wilson for the New York Times, combines color, shape and direction into a rhythmic flow from left to right. Setting the composition on a diagonal increases the feeling of movement and drama.

Australian aboriginal softwood coolamon with acrylic paint design
The traditional art of Australian aboriginal culture uses repetition and pattern almost exclusively both as decoration and to give symbolic meaning to images. The coolamon, or carrying vessel pictured at right, is made of tree bark and painted with stylized patterns of colored dots indicating paths, landscapes or animals. You can see how fairly simple patterns create rhythmic undulations across the surface of the work. The design on this particular piece indicates it was probably made for ceremonial use. 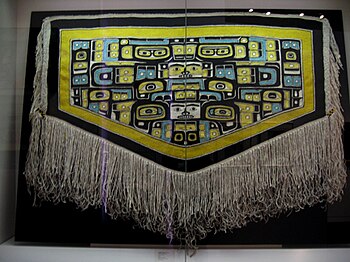 Chilkat blanket in the collection of the University of Alaska Museum of the North, Fairbanks, Alaska, United States
The textile medium is well suited to incorporate pattern into art. The warp and weft of the yarns create natural patterns that are manipulated through position, color and size by the weaver. The Tlingit culture of coastal British Columbia produce spectacular blankets distinguished by graphic patterns and rhythms in stylized animal forms separated by a hierarchy of geometric shapes. The symmetry and high contrast of the design is stunning in its effect.