Portrait of monk Kūya (ce. 930-972), Kosho, early 13th century. Wood, 117 cm high, Rokuharamitsu-ji Temple, Kyoto, Japan
One of the problems artists face in creating static (singular, fixed images) is how to imbue them with a sense of time and motion. Some more traditional solutions to this problem employ the use of spatial relationships, especially perspective and atmospheric perspective. Scale and proportion can also be employed to show the passage of time or the illusion of depth and movement. For example, as something recedes into the background, it becomes smaller and lighter in value. Also, the same figure (or other form) repeated in different places within the same image gives the effect of movement and the passage of time.

An early example of this is in the carved sculpture of Kūya, shown at left. The Buddhist monk leans forward, his cloak seeming to move with the breeze of his steps. The figure is remarkably realistic in style, his head lifted slightly and his mouth open. Six small figures emerge from his mouth, visual symbols of the chant he utters.[1] 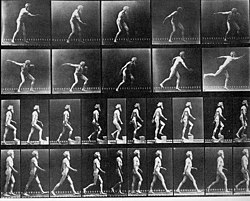 Eadweard Muybridge, sequences of himself throwing a disc, using a step and walking, circa 1893. Photographs.
Visual experiments in movement were first produced in the middle of the 19th century. Photographer Eadweard Muybridge snapped black and white sequences of figures and animals walking, running and jumping, then placing them side-by-side to examine the mechanics and rhythms created by each action.

In the modern era, the rise of cubism (discussed earlier in our study of space) and subsequent related styles in modern painting and sculpture had a major effect on how static works of art depict time and movement. These new developments in form came about, in part, through the cubist’s initial exploration of how to depict an object and the space around it by representing it from multiple viewpoints, incorporating all of them into a single image. Marcel Duchamp’s painting Nude Descending a Staircase from 1912 formally concentrates Muybridge’s idea into a single image. The figure is abstract, a result of Duchamp’s influence by cubism, but gives the viewer a definite feeling of movement from left to right. This work was exhibited at The Armory Show in New York City in 1913. The show was the first to exhibit modern art from the United States and Europe at an American venue on such a large scale. Controversial and fantastic, the Armory Show became a symbol for the emerging modern art movement. Duchamp’s painting is representative of the new ideas brought forth in the exhibition. 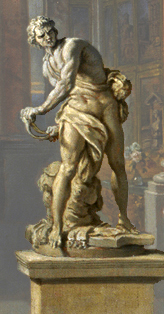 David, Gian Lorenzo Bernini, 1623-24. White marble, 170 cm high, Galleria Borghese, Rome
In three dimensions the effect of movement is achieved by imbuing the subject matter with a dynamic pose or gesture (recall that the use of diagonals in a composition helps create a sense of movement). Gian Lorenzo Bernini’s sculpture of David from 1623 is a study of coiled visual tension and movement. The artist shows us the figure of David with furrowed brow, even biting his lip in concentration as he eyes Goliath and prepares to release the rock from his sling.[2]

The temporal arts of film, video and digital projection by their definition show movement and the passage of time. In all of these mediums we watch as a narrative unfolds before our eyes. Film is essentially thousands of static images divided onto one long roll of film that is passed through a lens at a certain speed. From this apparatus comes the term ‘movies’.

Video uses magnetic tape to achieve the same effect, and digital media streams millions of electronically pixilated images across the screen. An example is seen in the work of Swedish Artist Pipilotti Rist. Her large-scale digital work Pour Your Body Out is fluid, colorful and absolutely absorbing as it unfolds across the walls.