The natural world has always given artists subject matter to experience and interpret. In it we find some of our greatest fears, so we try to organize it. It gives us spectacular joy, so we mimic it. Its grandeur motivates some of our highest aspirations, so we spin it in myth and symbolism. Our relationship with nature presents ironies too: it’s referred to as a maternal force, yet advanced societies are the most removed from it. All of these characteristics of nature become the stuff of artistic expression. 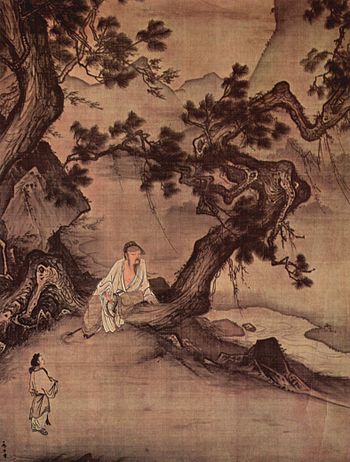 Ma Lin, Quietly Listening to Wind in the Pines, 1246. Ink on silk, National Palace Museum, Taiwan
Chinese culture includes a reverence for nature that’s reflected in its traditional painting styles. Landscape is used as metaphor to illustrate physical, philosophical and spiritual themes. We looked at Ma Lin’s wall scroll in the module "Artistic media: Two-dimensional art" in terms of the artist’s painting technique. Let’s reexamine it now (view the image at right) to see how Lin creates subject matter that gives prominence to both nature and the figure. First of all, he animates the landscape to emphasize its scale and undulating features, contrasting large boulders and strong, twisted pines in the middle ground with a more subtly painted background of mountains and water. A figure (a wanderer, priest or poet) rests at the base of a pine, more in contemplation and unity with his surroundings than in opposition to them. Notice how this figure is painted with colored pigment that brings an emphasis to his place in the composition. A second, even smaller figure inhabits the foreground on the left, enhancing the landscape’s sense of scale.

In Loquats and Mountain Bird (below left), the artist’s keen observational skills give specific information, but the work transcends mere physical description of the subject matter. Through formal composition and the artist’s deft touch we see a slice of nature – in a very shallow space, that is unified and completely believable. A similar but perhaps less poetic effect can be seen in the works of John James Audubon (below right). Audubon spent years documenting the birds and animals in America during the first half of the nineteenth century. The shallow space and strong use of placement, color and pattern give a more dramatic edge to his images.

In another more contemporary example, the glasswork of Ginny Ruffner provides a whimsical approach to her experiences with the natural world, providing delicate visual comments like the simple pleasure of looking out a window (see 2005, image 09) or marveling at the cyclical rhythms of water.

The natural world and our own experiences within it are incorporated into more utilitarian forms of art too. Architecture, often seen as an inorganic structural component, can mimic the landscape surrounding it. The 15th century Inca site of Machu Picchu in Peru contains dwellings with pyramidal stonewalls rising like the nearby mountain the site is named for. In addition to the buildings being extremely stable, their design directly reflects the cultural importance given the entire area. Machu Picchu was the center of Inca civilization. The development included terraced farms, homes, industrial buildings and religious temples.