The art historical record is filled with images of ourselves. Generally, the further back we go, the more anonymous these visages are. For example, the earliest works of art – crudely chiseled stone sculptures – record the human figure in exaggerated forms. The Venus of Berekhat Ram is dated to around 230,000 years ago. It, and other small stone figures from the same period, indicate that artistic expression was part of a pre-homo sapiens culture. There is now evidence of an art instinct: a natural inclination for humans to be creative and perceive our surroundings with an aesthetic sense. 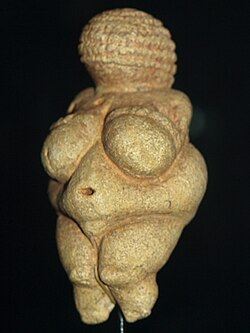 Venus of Willendorf, Paleolithic period, c. 25,000 BCE. Natural History Museum, Vienna, Austria
The Venus of Willendorf (pictured at right), dated to about 20,000 years ago, is an archetype of early human expression. The sculpture is remarkable for what is included and what is missing. The female figure's arms are draped over enormous breasts, and the enlarged genitalia, short legs, and exaggerated midriff reinforce the idea of a fertility figure. The tightly patterned headpiece indicates either braided hair or a knit cap. Missing from this extraordinary figure is any hint of facial identity: she may represent a solitary female or the collective idea of womanhood. 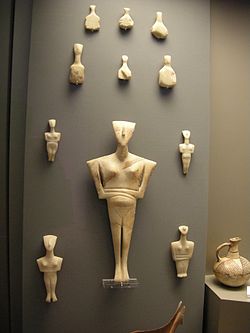 Cycladic figurines, c. 3000 BCE. Archeological Museum, Athens, Greece
These faceless and enigmatic figures persist in art for thousands of years. We see them again in figurines from the Aegean Cycladic culture dated to about 3000 BCE (image at right). Their form is standardized, with smooth surface texture, triangular heads, and crossed arms. You can even see a resemblance to these figures in certain modern sculptures, particularly by Romanian artist Constantin Brancusi from the early 20th century. His Sleeping Muse (1909) is an example.

Ancient Jōmon cultures of Japan produced extremely stylized earthenware figures, often female and, similar to the Venus figures of Western Europe, with enlarged breasts and hips but disproportionately short arms and legs. Thought to be ritual figures, the earliest examples are faceless and without adornment.[1] Later ones show generic features with curious insect eyes and more elaborate decoration.[2]

We start to see human figures with individual characteristics during the Old Kingdom dynasties of Egypt about 2500 BCE. Reserved for royalty and other high-ranking figures, these portrait sculptures, many times containing a man and women together, include an emotional connection as they stand or stride forward with their arms around each other. See example below left. In another example, below right, an Egyptian scribe sits cross-legged with his palette and papyrus scroll and a hairstyle comparatively similar to that of the Venus of Willendorf. Here, we get a much stronger sense of identity and form, with detailed description of the scribe's facial features, subtle but important rendering of musculature and even individual fingers and toes, all sculpted in correct proportion and scale.

Greek vase painting[3] uses figurative and decorative motifs to illustrate mythic narratives or simply depict scenes from everyday life. Many of the vases show athletic games, social gatherings or musical entertainment. The image on the amphora below left depicts a foot race run with weapons, known as a Hoplitodromos.

The Romans used painted portraits to commemorate the dead. Commonly known as Fayum mummy portraits, they were created with encaustic or tempera paints on wooden panels and placed over the face of the mummified body. The portraits all show the same stylistic characteristics including large eyes, individual details and the use of only one or two colors. The portrait below right shows a young man with curly hair and light beard. There is also a melancholy psychological element as the figure stares back at us.

Leonardo Da Vinci, Mona Lisa, c. 1503-1519. Oil on wood, Louvre Museum, Paris, France
Perhaps the most famous portrait in the Western world is Leonardo Da Vinci's LaGioconda, more commonly known as the Mona Lisa. The painting embodies many of the attributes we look for in a portrait: realistic form, detailed rendering of the sitter's features and an intangible projection of theircharacter. These qualities emanate from the genius and skill of the artist. Her gentle gaze and slight smile has endeared the Mona Lisa to viewers around the world for over 500 years.

Portraiture and the figure continue to be important motifs in modern and contemporary art. Pop artist, Andy Warhol, used photographs of politicians and Hollywood celebrities to create series of images that supplant traditional painted portraits and reinforce our idea of brand identity. His diptych of Marilyn Monroe from 1963 signifies her place on popular culture's altar as an icon of beauty and sexuality while alluding to her tragic suicide in 1962. The print's bright colours and rapid-fire images on the left hold our attention, while on the right we see her fading away into obscurity in black and white. With this staccato image format Warhol presents us with conflicting alternatives: the ubiquitous nature of celebrity and the fleeting nature of life.

Bruce Nauman's neon sculpture Human/Need/Desire uses words that uncover "fundamental elements of human experience.*" The pulsating neon sculpture has a trance-like effect as the viewer watches the words change in front of them. The work provides a collective meaning because we can all identify with its message.


The painter Alice Neel's portraits are exceptional, as they capture a sitter's likeness and character but with an expressionist edge. She preferred informal poses, used harsh colors and an unerring sense of design in portraits of family, friends, fellow artists, and political personalities.

Finally, in an artistic gesture that redefines what portraiture and self identity can be, Spanish-born artist Inigo Manglano-Ovalle does away with the figure altogether. His three-panel chromogenic print Glen, Dario and Tyrone presents us with the DNA signature of each individual. This work blurs the line between art, science, and technology. Now, a portrait is manifest, as blobs of colour and its integrity is established by the fact that each series of blobs is genuinely different than any other. This creative idea has even migrated to the marketplace: You can order your own (or someone else's) DNA portrait for the home or office.