Like so many other things we experience in our world that translate into art, those that engender ideas of peace and tranquility take many different forms. Some of these are iconic, others transitory and changing. 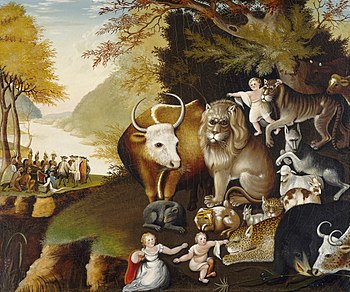 Edward Hicks, The Peaceable Kingdom, about 1833. Oil on canvas, Worcester Art Museum, Worcester, Massachusetts, USA
One such icon is a 19th century painting by Edward Hicks. In the The Peaceable Kingdom[1], Hicks describes the world with a visually literal translation of bible verse: The wolf also shall dwell with the lamb, and the leopard shall lie down with the kid, and the calf and the young lion and fatling together; and a child shall lead them.”

Hicks' painting (of which there are many versions), includes the scene of English colonist and founder of Pennsylvania, William Penn’s signing of a treaty with representatives of the Native American Lenape tribe. 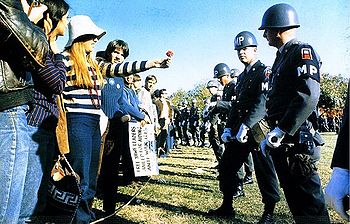 Female demonstrator offering a flower to a military police officer, 1967
In the photograph at right, a young woman participating in a peaceful demonstration in the US in the 1960’s holds a flower out to a military police officer. This small gesture is significant because it breaks the tension of the standoff between them and is akin to a universal symbol of peace: a dove carrying an olive branch.

Other artistic expressions of peace include large public monuments. One example is the Peace Arch in Blaine, Washington, USA (see image below left). Built in 1921, the stone arch straddles the international boundary between the two countries and commemorates the ongoing peaceful coexistence between Canada and the United States.

Related to this arch are many others collectively called Arches of Triumph. These arches stretch through art history starting from Roman times. They signify peace through the idea of military victory and national pride. The Arc de Triomphe in Paris is perhaps the most famous (see image below right). Built in the fist half of the nineteenth century, the arch stands as a victory monument to all French soldiers who fought in the Napoleonic Wars, and since then has become an icon of French victory over aggression and war. At 164 feet (50 m) high, its massive bulk and beautiful proportions are a testament to permanence.

A more contemporary example of peace, and one that is etched into popular culture, is the graphic Peace Symbol (below left) designed by Gerald Holtom in 1958 for use in the Campaign for Nuclear Disarmament. It is a universal signifier for peace and can be found on flags, buttons, banners and clothing. The symbol is incorporated on the Lennon Wall, a public space in the city of Prague in the Czech Republic dedicated to the memory of John Lennon, the late member of the Beatles rock band and an activist for peace. In the 1980’s Czech youths tagged graffiti on the wall as an outlet for their frustration against the Communist regime in power at the time (see image below right). One of Lennon’s best-known songs about peace and love is titled Imagine.