From WikiEducator
< Art and other worlds
Jump to: navigation, search

The art historical record is filled with works from many cultures that refer directly to spirituality. The following seven images are examples that help us understand how this connection is made. 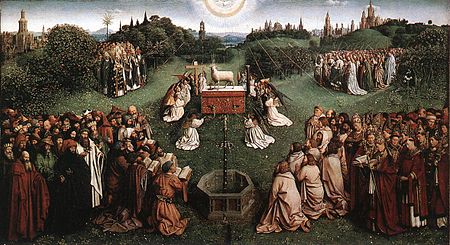 Jan Van Eyck, Adoration of the Mystic Lamb, detail from the Ghent Altarpiece, 1432. Oil on panel, St. Bavo Cathedral, Ghent, Belgium
Jan Van Eyck's Adoration of the Mystic Lamb (at left) from the fifteenth century uses a variety of iconographic symbols to present the idea of Jesus Christ. Foremost is the lamb on the altar in the middle of the panel. Jesus proclaimed he is the "Lamb of God," referring to the innocence and vulnerability of an infant sheep, but also to the one who will be sacrificed. Angels surround the lamb, the two in front swinging incense pots towards the altar. Blood gushes from the pierced breast of the animal, falling into a golden chalice. This reference is to the body and blood of Christ taking the form of bread and wine in the Christian Eucharist.

To the left of the altar is the cross, another symbol of Christ's sacrifice. On the right is a column, signifying that he is the pillar of the church. The fountain in the foreground represents both the baptismal font and the symbol of Christ as the water of life. All of this plays out within a pastoral landscape replete with meadows, orchards, forests, and, in the distance, a church steeple and town on a hill beyond. The circle of light at the top of the painting is generated by the Holy Spirit, which takes the form of a dove. Can you find more symbols? The symmetry of the composition is striking, and gives a strong sense of stability to the entire picture. The Adoration of the Mystic Lamb is one of the central panels from the twenty-four-panel Ghent Altarpiece.

File:Allah-eser.jpg
Hâfiz Osman, Name of Allāh, 17th century. Arabic calligraphy
Because of our human imperfections, Islamic religious belief considers it a sin to present God (Allah) in human form. Instead, Islamic spiritual images use fluid calligraphy and extensive decoration. At right is a seventeenth-century illustration with the name of God written within the middle circle, surrounded by gold flowers and ruby-colored leaves in symmetrical geometric patterns. The whole image takes the form of an open flower or bright sun. 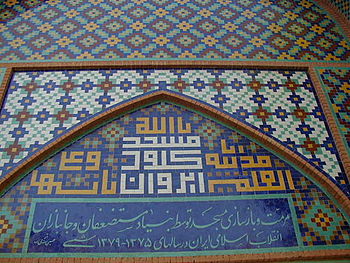 Blue Mosque in Yerevan, Armenia
We see this tight, geometric pattern again in a tile mosaic in a contemporary Islamic mosque (at right). It is significant to note that Arabic culture also gave the world its concepts of mathematics, geometry and astronomy. This style of illustration and embellishment has been used for centuries in Islamic cultures. You can refer back to Cross-cultural influences in the Art and architecture module to see the decorative designs on the fifth century Dome of the Rock mosque in Jerusalem.

File:Painted 17th century Tibetan 'Five Deity Mandala'; in the centre is Rakta Yamari (the Red Enemy of Death) embracing his consort Vajra Vetali; in the corners are the red, green, white, and yellow Yamari.jpg
Tibet, Five Deity Mandala, 17th century. Pigment on cloth, Collection: Rubin Museum of Art, New York City
Buddhist spiritual iconography has comparisons and differences in relation to both Christian and Islamic styles. The main compositional format in Buddhist spiritual images is the use of a central mandala, or circle. Tibetan mandala paintings show detailed decorative patterning similar to Islamic imagery, but anthropomorphize their gods and spirits much like Christianity does. The paintings are hierarchal, with each figure taking a place of status in relation to another.

You can see the striking visual effects Buddhist mandala paintings have in the example at right. In the Five Deity Mandala, complimentary colour sets of green and red, blue and orange create a visual tension that is balanced by the symmetry of the composition. In the centre is Rakta Yamari, a Buddhist deity idealized with a fierce look, large eyes, and flamelike hair. He embraces his consort Vajra Vitali. To the left and right of the large circle are four other gods, each embracing their own consort. They take the positions of the four directions: at the top right (west) is the red Raga Yamari. The bottom right (north) is green Irshya Yamari. The bottom left corner (east) is the white Moha Yamari and on the top left (south) is yellow Matsarya Yamari. Figures of lesser gods and gurus are placed throughout the composition. Notice the mandalas surrounding their heads. The Christian halo shares this significance. 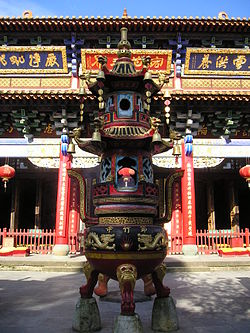 A Buddhist temple in China
The propensity for color and pattern in Buddhist spiritual art extends to the embellishments of their temples, including architectural and landscape design and large statuary symbolic of Buddhist gods and bodhisattvas (as exemplified in the image at right). 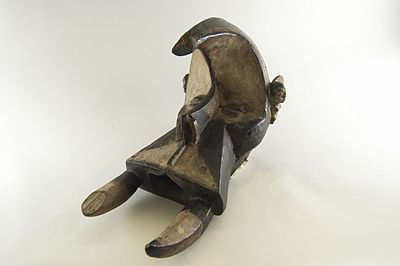 Igbo peoples, Nigeria, Horizontal Headdress in Elephant-Human Composite Form (Ogbodo Enyi), early 20th century. Pigment on wood, Brooklyn Museum, New York, USA
African cultures symbolize many spirits through costumes and masks used in ceremonies and rituals. The Ogbodo Enyi[1], or Elephant Spirit mask, has specific meaning to the Igbo people of northeastern Nigeria. The Ogbodo Enyi is often described as a harsh, violent spirit mask of unusual power. Men and boys from different age groups wear the mask and a heavy knit costume, in highly charged performances. The masker, accompanied by musicians playing gongs and drums, "works himself into a frenzy, shaking andtrembling. He suddenly bursts forth, running with long strides… charging through the village."

The mask’s form is extremely angular and stylized. You can see the tusks at the bottom of the mask in the image at right. The conical eyes and the elephant trunk (ilolo) jut out from the forehead. The ilolo is also a charm that protects the masker from his enemies. A human head (ntekpe) is carved in relief or fully round at the top of the mask, usually at the side or facing the back. This acts as a calming agent against the ferocious-looking elephant mask.

For all the ferocity and energy that goes into it, the Ogbodo Enyi performance is really a community exhibition of cohesiveness - a public demonstration that different age groups can work towards common goals.

In ceremonies in Burkina Faso, spirits run and swirl through crowds, wearing Bwa plank masks.[2] Recall the discussion of Bwa plank masks in the section on Emphasis in the module The visual language: Artistic principles. 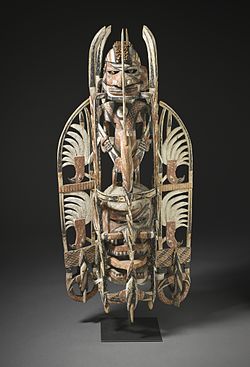 Papua New Guinea, Mask (Manua), c. 1890. Wood, sea sponge, snail apercula, pigment, 37 x 18 x 10 in (94 x 47 x 25.4 cm), Los Angeles County Museum of Art, California, USA
The human / animal form seen in Ogbodo Enyi is repeated in the Manua mask from New Guinea. A carved figure with a mask face stands on the head of a second larger mask. Surrounding them is a grid of fish, snakes, and birds. The mask is believed to harbour spirits of local legends or ancestors and is used during a Malanggan, a ceremonial gathering associated with group funerals and initiation rites. The mask is worn at the end of the Malanggan to clear ceremonial grounds of taboos. Another mask is pictured below.