From WikiEducator
< Art and other worlds
Jump to: navigation, search

The influence of dreams in art is significant. Shakespeare's A Midsummer Night's Dream is an example in classical literature. Dreams provide creative subject matter for visual artists too, and play an additional role in art through ceremony and ritual.

In Western culture the dream's place in art is most associated with the Surrealist movement in the early twentieth century. But dream imagery was part of a larger frame of reference in the Romantic period beginning in the late eighteenth century. This style is characterized by its emphasis on emotion, dramatic composition, and allegory. 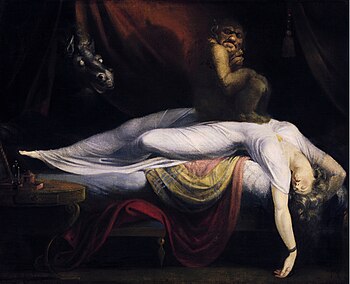 Henry Fuseli, The Nightmare, 1781. Oil on canvas, The Detroit Institute of Arts, Detroit, Michigan, USA
Henry Fuseli's The Nightmare (at right) is a famous example of a Romantic painting that uses a dream as its subject. Fuseli shows both the dreaming figure sprawled on her bed and the visual contents of her dream in the form of an incubus sitting on her chest and a ghost-eyed horse (literally a nightmare) looking in on the scene and a mysterious object – perhaps a domed building, behind a red curtain in the background. All of this takes place within dramatic light and dark areas in the painting’s composition. The artist paints a hideous scene with overtly sexual overtones.

The Surrealist movement mentioned above was first centered in literature, expanding to the visual arts later on. The French poet and writer André Breton (1896-1966) was instrumental in the development of Surrealist ideas. Looking for new avenues to written expression, he investigated the subconscious mind's ability to generate streams of ideas, words and phrases without necessarily making order out of them. The result was the use of automatic writing, or automatism. In the 1920s artists Joan Miró, Hans Arp and Yves Tanguy began to use automatism as a means to generate visual ideas.

The Surrealist artists used dreams in a different context than the Romantics. Though a few Surrealists did use dream images as subject matter, the real emphasis was on automatism and the resulting image it helped create.

Surrealism was influenced in large part by new ideas in psychiatry and the clinical work of Sigmund Freud. The idea of repressed feelings, reflexive movements, and past experiences interested the Surrealists very much. In the opening line of Breton’s Surrealist Manifesto, he writes, "Man, that inveterate dreamer, daily more discontent with his destiny…," and defines Surrealism as "psychic automatism in its pure state."

In particular, Yves Tanguy's paintings summon both automatism and dreamlike imagery. In The Satin Tuning Fork (1940), he sets precise biomorphic figures within a foggy, vacant landscape. The painting's title has no apparent relation to the objects in the work, and itself is probably a result of automatism.

A dream can also be a highly sought after goal or objective. Pablo Picasso alludes to this characterization in a series of etching prints titled The Dream and Lie of Franco (1937). The artist's portrayal of Franco as self-absorbed, tubular, and abstract strengthens our view of him as monstrous. Together, the prints illustrate a narrative of the fascist Spanish general in scenes of battles and destruction during his rule in the Spanish Civil War. (This work can also be seen within the context of Politics, conflict and war discussed in the last module.) Some of the individual prints in the series are studies for Picasso's protest mural Guernica from the same year.

In a final example, Australian aboriginal culture relies on the dreamtime to provide explanations about the origins of the earth, their ancestors, and the significance of ritual in their lives. These ideas are manifest in dream paintings: conventional abstract symbols painted on fields of color that signify connection to the dreamtime. This is part of the culture's mythic foundation.