The navigation map for the movie is as shown following... 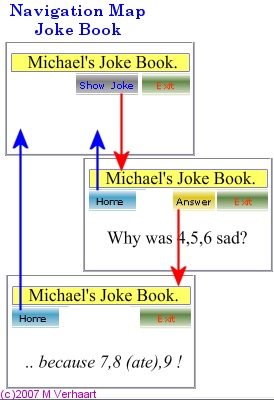 The first thing we will do is split the movie into areas. So create a channel to put in the keyframe labels.

2. Insert Keyframe in frame 5. In the Properties pane replace <Frame Label> with Home.

3. Insert Keyframe in frame 10. In the Properties pane replace <Frame Label> with J1.

4. Insert Keyframe in frame 20. In the Properties pane replace <Frame Label> with J1Ans.

You may notice that J1Ans doesn’t appear as there is only one frame to show the label. It is easier to work out what the label names are if they can be fully displayed. So, highlight frames 21 to 30 by clicking and Dragging the mouse over frames 21 – 30, then right click and Insert Frame.

Note: You may see several Labels Layers in some sample Flash Movies. Usually this indicates that the developer could not show the complete label in one channel, so created another.

5. Create a new layer called Actions above the default layer (in my example Layer 1) and call it Actions. (We will be adding some ActionScript to this layer later on)

6. Create a new layer called Heading above the default layer(in my example Layer 1) and call it Heading.

7. With the Heading layer selected, use the Text Tool to add a heading (in my case “Michael’s Joke Book” onto the stage.

8. Highlight frames 1 to 4 in the Heading Layer, right click and select Clear Frames. We are keeping frames 1-4 clear to allow for a pre-loader to be added at a later stage. A pre-loader is used to load some of the larger media assets into the movie before it is displayed to the user, and usually shows a progress bar on screen.

Let’s add a box border to the heading. What we are going to do is add a box in a layer below the Heading Layer. This is done so that the text will appear ON TOP of the box. If we swap the layers (you can drag them to try) the text will be hidden behind the box. This is known as the z-Order. (Note this is opposite to Director).

9. Insert a Layer call it Heading-box below Heading.

10. Click on the Rectangle Tool and change the fill color to a lighter one .

11. Move the playback head so that the heading is displayed

13. Clear frames 1-4. Flash should have a display similar to that shown following... 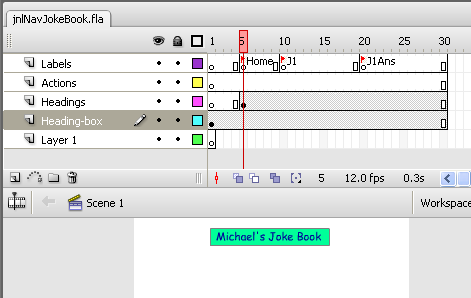 14. Insert a new layer and call it Joke1, above the bottom Layer.

15. With the Joke1 layer highlighted, use the text tool to enter the Joke “Why was 4,5,6 sad?”. This will put the text on the whole layer. Recall that we only want it displayed from frame 10 to 19. So highlight frames 1-9 on the Joke1 layer, and Right click > Clear Frames

19. Test the movie by dragging the red playhead. Move the text on the screen so that it looks balanced.

20. Once all is ok, it is probably good to save and test the movie. Call the movie jnlNavJokeBk.fla. The flash environment should resemble that shown following.. 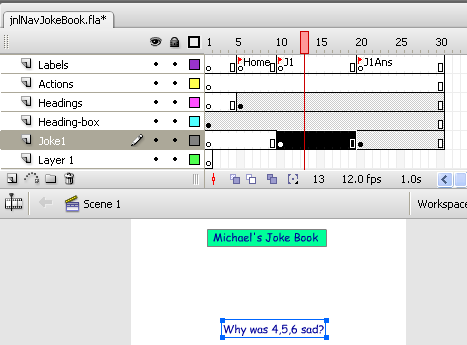 You probably noticed that when you Test the Movie (Control > Test Movie), or Publish it, the movie loops continuously.

So as shown in an earlier page - Stop movie We need to stop this move in several places. 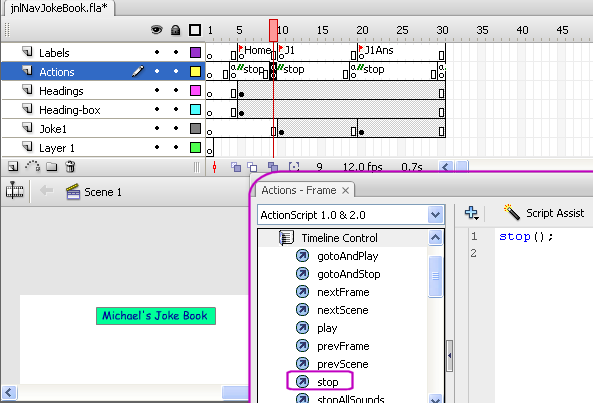 If you use the play button on the toolbar the movie will run without taking any notice of the stop ActionScripts, so to test the movie, you must compile it.

This will mean the movie doesn’t work too well. When we test it, it will stop with just a heading. But Flash is rather clever, and if we press the [Enter] key the movie will jump the stop command and continue.