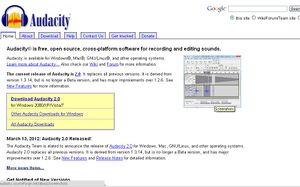 Audacity home Page
Audacity is one of the most popular free application software for digital audio recording and editing. It is available for Windows®, Mac®, GNU/Linux® and other operating systems.

Audacity was developed by Dominic Mazzoni and Roger Dannenberg at Carnegie Mellon University. It is an excellent tool for audio reording as well as editing for developing audio resources for educational or personal or any other use. Besides the recording function you can also used it for post-processing of all types of audio like adding effects in the recorded audio.

The latest release of Audacity is 2.0.1 and was released on 29 June, 2012. It replaces 2.0.0 and all previous 1.2 and 1.3 versions. Among several improvements, keyboard shortcuts can now be allocated to effects, and Nyquist plug-ins can be added to Chains. See the 2.0.1 Release Notes for detailed changes.

You can WATCH A VIDEO showing the working on Audacity.

Features Audacity has many features -

Back to Unit 2.4 Homepage
Retrieved from "https://wikieducator.org/index.php?title=User:Nisha_singh/My_sandbox/Content-E-learning_tools/Audacity&oldid=791621"