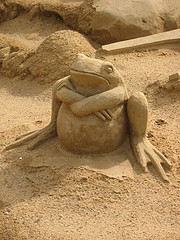 Daniel suggested on my user page, that as part of the workshop we could work together on a collaborative editing project, such as Quality control in open versus closed approaches to authoring educational resources. I love the way Daniel thinks. I have been following him for some time in Friend Feed, and of course I would jump at any opportunity to do something collaborative with him. (Plus, we both seem to be interested in brains!)

History of the project

A little while back when Rob Inskeep found out his kids were studying the brain at school he had the great idea of inviting me to visit the school. He thought it would be fun to have an actual 'brain scientist' come to visit and meet them.

After saying yes, I realised that it was hard to find an activity that kids could be actively involved with. I did not want to stand up and talk for an hour, and I thought that passing around a plastic model of the brain was quite boring. I also wanted an activity that could be easily 're-used' even in lower decile schools. This meant I was not to bring expensive technology from the lab, but rather try to build something with house-hold items.

And so it was that the 'water neuron' was born. The students in the school 'played' with it in groups of about 4 students each, and then we all got together to discuss what each group had learned.

In the process of playing with this I realised that this model was pretty good at demonstrating the passive electrical properties of neurons. This is a concept that students at Uni find rather difficult to grasp without basic knowledge of electricity and maths. But this little model works wonders in giving an intuitive feel of what all of those equations represent. So, here is my first attempt at trying to bring the water neuron to a new level, and hopefully develop it into a proper OER, as suggested by Valerie Taylor. (Project also entered in Learning Contract Project Page.

Overview of the excercise

The concept of errors in measurement applied to optical illusions

The idea sprouted after a conversation with Peter Hall, a school maths teacher. Can we use a neuroscience phenomenon to bring home the idea of how we measure things, what the errors of our measurements are? Visual illusions in which we perceive objects to be of different sizes because of the 'context' in which they are presented provide good examples of the differences between 'perceived' and 'real' sizes are, and show an application of measurement/error in measurement to describe the phenomenon. We are developing an OER called BrainMaths where this cognitive phenomenon can be explored in a maths class at low cost.

This is a series of lectures on human embryology that I give for 1st year course at the University of Auckland. This series of lectures are part of BIOSCI 107: Biology for Biomedical Science: Cellular Processes and Development, targeted to first year undergraduates (tertiary). I have subdivided the course material into 10 units, which are presented over 3 lectures of 1 hour each.

As part of my requirements for the Postgraduate Certificate in Academic Practice, I am asked to re-design a course module that I am involved in teaching. I have chosen to redesign a series of lectures on the embryology of the nervous system that I give for 3rd year Biomedical Sciences undergraduates (tertiary) that are part of a course on physiology and pathophysiology of the brain (University of Auckland). I have subdivided the course material into 9 units, which are presented over 3 lectures of 1 hour each.

I teach histology in the Introduction to Human Biology course for the Hikitia te ora - Certificate in Health Sciences. Histology is taught in first year in BIOSCI107, Biology for Biomedical Science : Cellular Processes & Development. I pick up from there in second year, teaching histology again as part of MedSci 201 Human Structure and Function. I decided to make sure that all content was aligned and that encouraged me to start this series of histology resources.

<this is a place to drop ideas>

<this is a place to discuss stuff>