I am a South Sea Evangelical Church member. This is one of the significant church organisation in the Solomon Islands to which my community people is a firm member this church. The church however, originated from Bunderberg in Australia by a young missionary called Miss Young. The establishment of this church movement took place in Malaita during its dark age in history by which Peter Ambuofa is the one who took the risk in bringing the gospel of Jesus first the first time to Malu'u, Malaita and later spread to other parts of the Island and other Provinces in the Solomon Islands.

I am from a group of people called Toambaita. Thus, our community people abide firmly to Christian principles and as a united people working for the same goal and aspiration. People seems to provide help to each other in our community. This reflects unity for eternity. 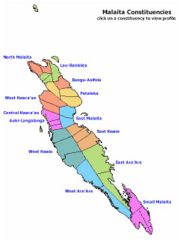 Malaita Province is one of the populous and developed Provinces of the Solomon Islands. It consists of many tribes of Melanesian peoples with various language groups and customs, South Malaita island, and the two remote Polynesian atolls of Sikaiana and Ontong Java (or Lord Howe) to the east and far north, respectively. The Provincial capital is Auki, serviced by daily flights by Solomon Airlines and also a good shipping service.

There are alot of development issues took place in Malaita Province. Most of those catered by the government, NGOs and the people of Malaita themselves.

In the early 1990s, Malu'u Primary School however, developed into a community high School which is currently known as Arnon Atomea High School. It therefore, consisted of forms 1-3.In mid 1990s, the school established its first form 4 and that developed into form 5 the following year. In 2007 Arnon Atomea High School took a great leap forward and established its first form 6 as one of the senior secondary school level in history ahead of the well established Schools on the Island of Malaita.

The future position of Arnon Atomea High School is looking progressing and thus would leap forward to the next stage soon. With the growing capacity of professionalism and technology, the school is hoping to establish a form 7, estbliah a computer lab which will work with the DLCP Centre at Malu'u and a Sienior and junior science lab. These are our dreams that must come true one day.Doing this will serve the people of our place for a better leaders and place to live.

: Well done you have made excellent progress. The only mistake you made with these pedagogical templates is forgetting to "close" the template with two curly brackets -- I've copied your example and closed the template properly below. Have you had a chance to experiment with images yet? I see that you've basically got the syntax right -- all you need to do now is upload this to the server by clicking on the red link for the image and following the instructions on screen --Wayne Mackintosh 06:36, 19 February 2008 (UTC))