To review a Carnot cycle is a theoretical heat engine composed of four steps: 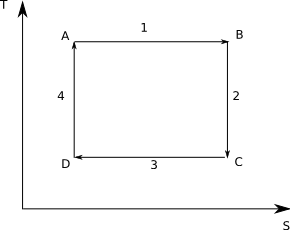 Note that by the second law that the adiabatic steps have constant entropy and hence are shown by vertical lines.

For the adiabatic steps, [math]Q=0[/math]

Since the cycle begins and ends in the same state, ΔU = 0.

Then from the first law:

Then the efficiency is

Which is the result we had before.

In a real cycle the Clausis inequality says that for the adiabatic steps we must Q > 0, since no real system is irreversible. Then the graph looks like: 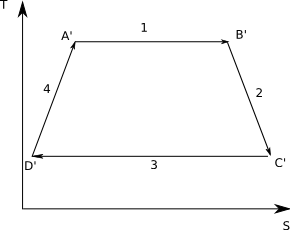 Hence, a real cycle cannot be as efficient as a Carnot cycle operating between the same temperatures. We have then proved the Carnot principle.

As an example of using the concept of efficiency to calculate work and heat, consider the following problem:

A power plant works at a boiler temperature of 550 K and an exhaust temperature of 400 K. If the efficiency is 75% of the Carnot cycle efficiency, how much heat is needed from fuel and how much is expelled through the exhaust, if the power output is 2.5 MW? 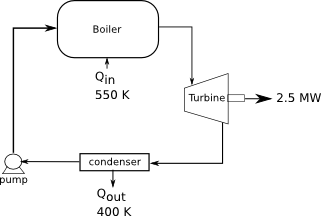 A refrigerator cycle with a COP of 2.7 is used to maintain the food compartment at 3 °C. The compartment continuously receives 1260 kJ/h of heat from the environment. The cost of electricity is 0.165 US$/kWh, and the refrigerator motor runs one-third of the time. Determine (a) the shaft power, in kW, the cycle requires, (b) the cost of the operating unit in dollars per day, (c) what is the rate of heat rejected to the outside, and (d) the maximum COP if the outside temperature is 30 °C. 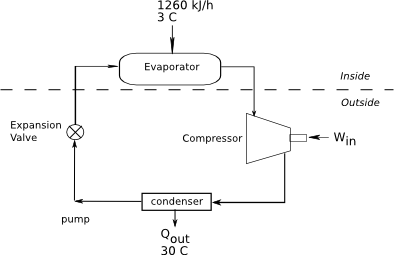 Often cycles are combined. These two exercises are examples of this.

Hint: Draw a diagram! (Here it really does help)

In this exercise we have two heat engines in series. In other words, the heat output from the first cycle is used as the heat input for the second.

Two Carnot heat engines operate in series. Engine A receives 2500 kJ of heat at 1000 K. All of the heat tranfser from engine A is used as energy input to engine B. This transfer occurs at 460 K. The heat rejected from engine B is 590 kJ. Find: (a) The amount of heat transferred between the two engines, (b) the total work output, (c) the efficiency of engine B, and (d) the temperature of the rejected heat from engine B.

In this exercise the work produced by a heat engine is used to drive a refrigerator.