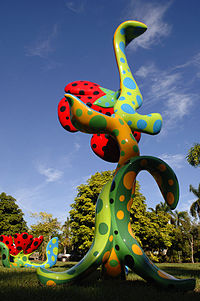 How many times have you looked at a work of art and wondered "how did they do that"? We tend to think of the artist as a solitary being, misunderstood by society, toiling away in the studio to create a masterpiece—and, yes, there is something fantastic about a singular creative act becoming a work of art. The reality is that artists rely on a support network that includes family, friends, peers, industries, business interests, and, in essence, the whole society they live in. For example, an artist may need only a piece of paper and pencil to create an extraordinary drawing but depends on a supplier in order to acquire those two simple tools. Whole industries surround art making, and artists rely on many different materials in order to realize their work, from the paper and pencil just mentioned to the painter’s canvas, paints, and brushes; the sculptor’s wood, stone, and tools; and the photographer’s film, digital camera and software, and chemicals used to manipulate an image.

After the artwork is finished, there are other support networks in place to help exhibit, market, move, store, and provide commentary. Commercial art galleries are a relatively recent innovation, springing up in Europe and America during the Industrial Revolution of the nineteenth century. As these societies concentrated their populations in cities and formed a middle class, there was a need for businesses to provide works of art for sale to a population that began to have more spare time and some discretionary income. As art became more affordable, the gallery became a place to focus solely on buying and selling, and, in the process, making art a commodity.

Museums have a different role in the world of visual art. Their primary function is in the form of a cultural repository—a place for viewing, researching and conserving the very best examples of artistic cultural heritage. Museums contain collections that can reflect a particular culture or that of many, giving all of us the chance to see some of the great art humanity has to offer.

The role of the critic commenting on art is another function in the process. Critics offer insight into art’s meaning and make judgments determining “good” or “bad” art based on the intellectual, aesthetic and cultural standards they reflect. We will take a closer look at the role of the critic when we explore meaning in a later unit.

In this way, museums, galleries, and critics have become gatekeepers in helping to determine what is considered art within a culture like our own.

Write a brief response to the following questions: