The artistic process/Art as social activity

Some of the grandest works of art are made not by a single person but by many people. Pyramids in Egypt and Mexico are massive structures, built by hundreds of laborers under the direction of designers and engineers. Egyptian pyramids are tombs for individual royalty, while those in Mexico function as spiritual altars dedicated to gods or celestial objects. They are typically placed at a prominent site and give definition to the surrounding landscape. Their construction is the cumulative effort of many people, and they become spectacular works of art without the signature of a single artist. 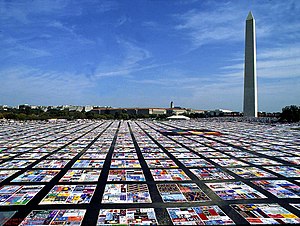 The NAMES Project AIDS quilt, representing people who have died of AIDS, in front of the Washington Monument in Washington, DC, USA
A more contemporary example of art making as a community effort is the AIDS Memorial Quilt Project. Begun in 1987, the project memorializes the thousands of lives lost to the disease through the creation of quilts by families and friends. Blocks of individual quilts are sewn together to form larger sections, virtually joining people together to share their grief and celebrate the lives of those lost. The project is evidence of the beauty and visual spectacle of a huge community artwork. Today, there are over 40,000 individual blocks. The quilt project is ongoing, growing in size, and exhibited throughout the world. 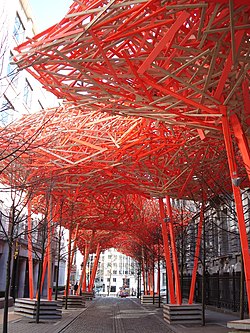 An example of public art: Arne Quinze, The Sequence (2008), wood; installed at the Flemish Parliament Building, Brussels
Many artists collaborate with non-artists in arrangements designed to produce work for a specific place. Public art is a good example of this. The process usually begins with a select panel of the public and private figures involved in the project who call for submissions of creative ideas surrounding a particular topic or theme, then a review of the ideas submitted and the artist's selection. Funding sources for these projects vary from private donations to the use of public tax dollars or a combination of the two. Many states have laws on the books which stipulate that one percent of the cost of any public construction project be used for artwork to be placed on the site.

After the selection process the artist will commence on an intense collaboration with architects, engineers, public administrators and others connected with the project, ultimately resulting in the installation of a public artwork. Because of its complexity this process needs to be expertly managed. Other countries have similar programs. All of them allow individual artists and collaborative teams the chance to put a definitive creative stamp on public spaces.

Public art projects can be subject to controversy. It's not easy for everyone to agree on what constitutes "good" or "bad" art, or at least what is appropriate for a public space. The issue takes on a more complex perspective when public money is involved in its funding.

One example of a controversial public work of art involves Richard Serra's sculpture Tilted Arc installed in 1981. Read the following essay describing the controversy and the outcome:

Time, money, a space to work in, a supportive family and public, a culture that respects skill and values creativity and expression: all of these are required for the artist to thrive. What does an artist give back to society? They give voice to speak of those things that language cannot describe, and an experience that pays attention to aesthetics and an interest in the world. They give expression to what it is to be human in all its positive and negative forms. A wonderful example of this is provided in the photography of Don Tremain. His "Salty Dogs" series of black and white images featuring country musicians quietly speaks to the power of music and the aesthetic image in art and their connection to community, place and the singular creative act.

If you have access to others studying this course, try to find and pair up with another student with whom you can collaborate. If not, do this by yourself.

Compare and contrast art created as a social activity and as a singular creative act.

Write your responses in your journal.

Here are some resources to help you with this exercise:

Be sure to cite any sources you might use, and include links to any images you use.