For centuries, craftsmen have formed associations that preserve and teach the secrets of their trade to apprentices in order to perpetuate the knowledge and skill of their craft. In general, the training of artists has historically meant working as an apprentice with an established artist. The Middle Ages in Europe saw the formation of guilds that included goldsmiths, glassmakers, stonemasons, medical practitioners, and artists and were generally supported by a king or the state, with local representatives overseeing the quality of their production. In many traditional cultures, apprenticeship is still how the artist learns her or his craft, skills, and expressions specific to that culture. Some nations actually choose which artists have learned their skills to such a degree that they are allowed and encouraged to teach others. An example would be artists considered National Treasures in Japan. 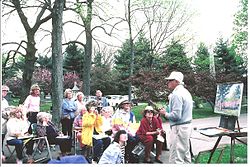 Art class
In the developed nations, where education is more available and considered more important than experience, art schools have developed. The model for these schools is the French Royal Academy founded by Louis XIV in the seventeenth century. In the nineteenth century, the Victorians first introduced art to the grade schools, thinking that teaching the work of the masters would increase morality and that teaching hand-eye coordination would make better employees for the Industrial Revolution. These ideas still resonate, and are part of why art is considered important to children’s education. A 2009 New York Times article by Steve Lohr explains how this notion has carried into the realm of high technology and the digital arts. A woman quoted in the article says that a proficiency in digital animation is an asset less for technical skills than for what she learned about analytic thinking.

Like most skilled professions and trades, artists spend many years learning and applying their knowledge, techniques and creativity. Art schools are found in most colleges and universities, with degree programs at both the undergraduate and graduate levels. There are independent art schools offering two- and four-year programs in traditional studio arts, graphic arts, and design. The degree earned by students usually ends with a culminating exhibition and directs them towards becoming exhibiting artists, graphic designers, or teachers. Such degrees also consider the marketing and sales practices of art in contemporary culture. Here are links to some of the different art schools.

Many artists learn their craft on their own through practice, study, and experimentation. Whether they come from art schools or not, it takes a strong desire to practise and become an artist today. There are no longer the historical opportunities to work under church, state, or cultural sponsorships. Instead, artists are driven to sell their works in some other venue, from a craft fair to a big New York City gallery (New York City being the official centre of art and culture in the United States). There are very few communities that can support the selling of art on a large scale, as it is generally considered a luxury item often linked to wealth and power. This is a modern reflection of the original role of the art gallery.

What is required to become an artist? Skill is one of the hallmarks that we often value in a work of art. Becoming skilled means a continual repetition of a craft or procedure until it becomes second nature. Talent is certainly another consideration, but talent alone does not necessarily produce good art. Like any endeavour, becoming an artist takes determination, patience, skill, a strong mental attitude, and years of practice.

Creativity is another element necessary to become an artist. What exactly is creativity? It’s linked to imagination and the ability to transcend traditional ways of thinking, with an exaggerated use of alternatives, ideas, and techniques to invent new forms and avenues of expression. The American experimental composer Leo Ornstein described creativity this way:

Creativity is used in traditional art forms as well as more innovative ones. It’s what an artist uses to take something ordinary and make it extraordinary. Creativity can be a double-edged sword in that it’s one thing that artists are most criticized for, especially in the arena of buying and selling art. In general, the buying public tends to want things it recognizes, rather than artwork that challenges or requires thinking. This dichotomy is perhaps best illustrated in a poem by the English writer Robert Graves, “Epitaph on an Unfortunate Artist”:

The ability to give visual expression is really what art is all about. It can range from creating pieces just for beauty’s sake (aesthetics) or for social, political, or spiritual meaning. To fully appreciate the artist and his or her voice, we need to consider that if we value expression we must value a multitude of voices, some of which contradict our own values and ideas. The artistic process culminates in a form of human expression that reaches all of us, at some level.

View at least five short videos from the art21 website. You can search for artists by using the tab at the top of the page. Pay attention to how the artists work and what they say about their process of creating art. List the artists you viewed, and say who surprised you the most and why.

Place one artist in each of the following categories: